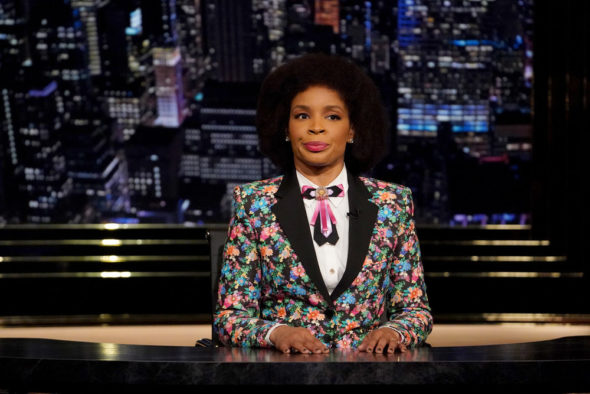 The Amber Ruffin Show is not leaving Friday nights anytime soon. Peacock has renewed the late-night series through September. A topical comedy program, the show airs once a week and launched in September 2020.

Peacock revealed more about the renewal in a press release.

The WGA nominated series is currently streaming on Peacock with new episodes dropping every Friday.

“Amber Ruffin’s unique brand of comedy and effervescent personality allow her to shine on Peacock week after week,” said Katie Hockmeyer, Executive Vice President, Late Night Programming, NBCUniversal Television and Streaming. “Each episode raises the bar with a variety of sketch material that is both culturally relevant and hilarious. We are so fortunate to have Amber at the forefront as Peacock paves the way for late-night in the streaming space.”

THE AMBER RUFFIN SHOW showcases Amber’s signature smart and silly take on the week’s news. No matter what’s happening in the world, Amber responds to it with a charming mix of seriousness, nonsense, and evening gowns. THE AMBER RUFFIN SHOW is a topical late-night show with just the good parts – the comedy.

Emmy and WGA Award nominee Amber Ruffin is also a writer and performer for NBC’s “Late Night with Seth Meyers.” Ruffin was the first African American female to write for a late-night network talk show in the U.S. She wrote and performed on Comedy Central’s Detroiters and was a regular narrator on the cabler’s Drunk History. Ruffin was previously a performer at Boom Chicago in Amsterdam, the iO Theater and the Second City in Chicago. In addition, she was a writer/performer for the 2018 and 2019 Golden Globe Awards and has written for the series A Black Lady Sketch Show. Ruffin is a New York Times bestselling author, along with her sister Lacey Lamar, of “You’ll Never Believe What Happened to Lacey: Crazy Stories of Racism,” published by Grand Central Publishing. Recently, Ruffin was named to the 2021 TIME100 Next List, TIME’s list of the next 100 most influential people in the world.

Tarik Davis serves as the announcer for the series.”

What do you think? Are you a fan of The Amber Ruffin Show on Peacock? Do you plan to continue watching the series?