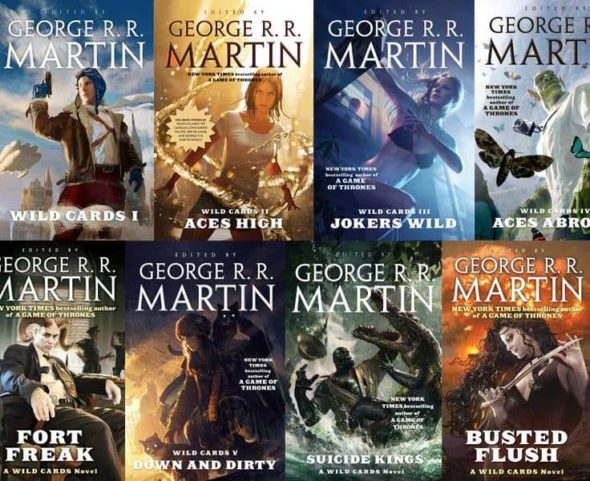 Wild Cards now has a new home, but it has lost a writer. The series of books, edited by George R.R. Martin (Game of Thrones), has been in development by Hulu as a TV series since 2018, and now the Peacock streaming service has picked up the project.

Andrew Miller was set to write and produce the drama for Hulu, but he is no longer involved with the series. A search for a new writer is now ongoing. Martin will executive produce the series along with Melinda Snodgrass and Vince Gerardis. Martin and Snodgrass edit the Wild Card books and Gerardis is Martin’s manager.

The Wild Cards novel series debuted in 1987. More than 40 authors have written for the fantasy book series and over two dozen books have been published. The most recent was published in 2019.

Variety revealed the following about the plot of the books and future Peacock television series:

“In the series, an alien pathogen known as the Wild Card virus is released over Manhattan in 1946, altering the course of human history. The virus rewrites DNA, mutating its survivors. A lucky few are granted awe-inspiring superpowers, while the sad majority are left with often repulsive physical deformities.”

Hulu was looking at developing two series based on Wild Cards, but it is not known if Peacock will do the same.

What do you think? Are you a fan of the Wild Cards book series? Will you watch the series when/if it eventually comes to Peacock?

Wasn’t Gregory Noveck the one who made this all happen?