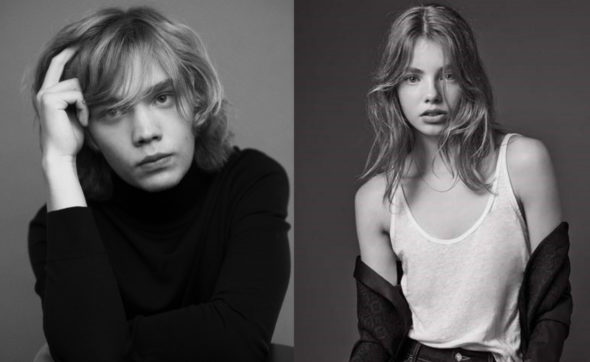 Based on the novel by John Green, the drama “is told through the eyes of teenager Miles “Pudge” Halter, as he enrolls in boarding school to try to gain a deeper perspective on life. He falls in love with a girl, Alaska Young, and after her unexpected death, he and his close friends attempt to uncover the truth behind her death and make sense of it.”

On Looking for Alaska, Plummer will be playing Miles Halter and Froseth has been cast as Alaska Young. Hulu has not yet announced a premiere date for their new series, but you can read more info below:

Kristine Froseth and Charlie Plummer have been cast as the leads of Hulu’s upcoming 8-episode limited series, “Looking for Alaska,” based on bestselling John Green novel from Paramount Television and Josh Schwartz and Stephanie Savage’s Fake Empire.

Logline: The series is based on the John Green novel of the same name. It is told through the eyes of teenager Miles “Pudge” Halter, as he enrolls in boarding school to try to gain a deeper perspective on life. He falls in love with a girl, Alaska Young, and after her unexpected death, he and his close friends attempt to uncover the truth behind her death and make sense of it.

“Looking For Alaska” is the award-winning, genre-defining debut from John Green, the #1 international bestselling author of “Turtles All the Way Down” and “The Fault in Our Stars.” With millions of copies sold, the novel is a New York Times Bestseller, a USA Today Bestseller, a Los Angeles Times Book Prize Finalist and TIME Magazine‘s 100 Best Young Adult Novels of All Time. Green was awarded the American Library Association’s Michael L. Printz Award for “Looking for Alaska,” which PBS recently included in its Greatest American Read – 100 Most Beloved Books.

Kristine Froseth has been cast in the role or ‘Alaska Young.’ Beautiful, mercurial, and unpredictable, Alaska is the girl who broke your heart in high school — or she’s the girl it broke your heart not to be. An obsessive reader, she’s another student at Culver Creek Academy, a member of The Colonel’s clique of outcasts. An effervescent young woman who attracts Miles’s instant attention, she’s still a ball of fire, and it’s a pretty sure thing that somehow, some way, Miles is going to get burned here. Her outward confidence hides a broken home, and a past she is trying to outrun.

Kristine Froseth can currently be seen in two Netflix features: SIERRA BURGESS IS A LOSER, which was released September 7th, 2018, and Gareth Evan’s APOSTLE, opposite Dan Stevens, Michael Sheen, and Lucy Boynton, which was released October 12th, 2018. She recently wrapped shooting the female lead in A24’s LOW TIDE, as well as the lead role in Emil Nava’s feature SNORKELING for Automatik. Next up, she can be seen in MGM Television’s limited series THE TRUTH ABOUT THE HARRY QUEBERT AFFAIR opposite Patrick Dempsey and Ben Schnetzer for director Jean-Jacques Annaud, which opened Cannes Series on April 7th, 2018 and premiered on September 4th, 2018 on SkyWitness in the UK. It will release stateside in 2019. Forseth is represented by CAA, Anonymous Content and Hansen Jacobson.

Charlie Plummer has been cast in the role of ‘Miles Halter.’ Miles has the body of a gangly teenager and the soul of an old man. Bookish and unpopular in his native Florida, Miles has won a scholarship to the prestigious Culver Creek Academy in Alabama, and he’s more than willing to start all over, in a new school and a brand new state. Miles has memorized all the Famous Last Words of all the great men of history — and pretty much nobody else in Florida gives a rat’s ass about his morbid hobby. After escaping his mother’s smothering farewell embraces, Miles finds that academic life is not all that different at Culver Creek — only at this school, there is a clique of outcasts that instantly accepts Miles as a blood brother. And since this clique includes the fetching, mercurial, utterly lovable Alaska Young, Miles joins up on the spot.

Charlie Plummer most recently starred in the A24 release LEAN ON PETE, written and directed by Andrew Haigh (45 YEARS, WEEKEND) and featuring Steve Buscemi, Chloë Sevigny and Travis Fimmel. The film received critical acclaim throughout the 2017 festival circuit and beyond; his role in the film earned him the coveted Marcello Mastroianni Award at the Venice International Film Festival. Plummer starred in Ridley Scott’s kidnap thriller ALL THE MONEY IN THE WORLD, playing John Paul Getty III alongside Christopher Plummer, Michelle Williams and Mark Wahlberg. Upcoming, he will appear in the features THE CLOVEHITCH KILLER alongside Dylan McDermott; the UNTITLED PIPPA BIANCO PROJECT for A24; SPONTANEOUS, opposite Katherine Langford; Thor Freudenthal’s WORDS ON BATHROOM WALLS; and Nabil Elderkin’s feature directorial debut GULLY. Previously, he appeared in in the 2017 indie drama thriller THE DINNER, opposite Richard Gere, Laura Linney, Steve Coogan, Chloë Sevigny and Rebecca Hall, written and directed by Oren Moverman. Prior to that, Plummer played the titular role in KING JACK, which won the Audience Award at the 2015 Tribeca Film Festival, released theatrically in 2016. Plummer began his professional career in Sopranos’ creator David Chase’s feature film, NOT FADE AWAY, and the same year was cast in a recurring role in HBO’s award-winning Boardwalk Empire. He was also a series regular on the Netflix cold war drama GRANITE FLATS, starring with Christopher Lloyd and Parker Posey. He currently resides in New York. Plummer is represented by CAA, Luber Roklin Entertainment, Zoom Talent Management and Peikoff Mahan.

What do you think? Have you read Looking for Alaska? Will you watch the Hulu series?