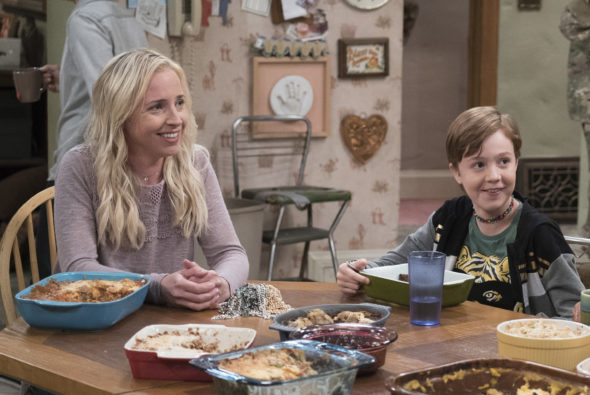 While The Conners TV show has not been cancelled or renewed for season two, ABC has shown it has some faith in the Roseanne spin-off (a show no one thought would exist, this time last year). The network has ordered an additional episode for the first season, bringing the total count to 11. The accidental sequel, which was only ordered after the network cancelled Roseanne in wake of Roseanne Barr’s ‘repugnant’ social media posts, has done quite well in the ratings thus far, but it has a limited episode count, because of the principal cast’s limited availability.

The Conners: A Look at the Ratings

The first season of The Conners is averaging a 2.03 rating in the 18-49 demographic and 9.28 million viewers. It is currently the network’s top-rated scripted TV show, beating out the other ABC TV shows in that category, by a mile.

With ratings like that, the network is sure to want a second season, provided they can get the cast and crew on board and make everything else work out, behind the scenes.

Like its predecessor, Roseanne, The Conners was intended for a short run because of its cast members’ other commitments. Roseanne had been renewed for a 13-episode second season. The Conners was originally picked up for 10 episodes in the wake of Roseanne’s abrupt cancellation.

What do you think? How are you enjoying The Conners TV series? Do you think it will be cancelled or renewed for a second season on ABC? Let us know, below.

I binge watched all of my DVRed episodes of The Conners tonight and I loved it!

They really have nerve calling the show the Connors. Wear is Clare Danes, or Linda Hamilton Or Arnold or John Connors or that evil Christina Locan. Also that dumb bald doctor that trying to tell us none of this in the story has ever happened. Would love to watch and support the Connors but get the right members of the cast and the right script.

I love Lori Metcalf, but lets be real. The show was called “Roseanne” for a reason.

LOVED LOVED LOVED the reboot of Roseanne. I think ABC shot themselves in the foot when the former Abc Entertainment Pres. cancelled it. As for THE CONNORS, I will never watch that and the fact that a show you cancelled is still the #1 ABC Show with 19.8 million viewers tells me all I need to know. CANCEL THE CONNORS, I haven’t watched it, nor do I ever plan on watching it.

I was appreciating this show about working people handling bereavement.I thought it was good. nd then we got the cliche of a silly pregnancy. I am disappointed.

Love the Connors, then again i would have loved another season of Roseanne. I wasn’t enjoying Roseanne Barr, i enjoyed Roseanne Connor! Anyway still a great cast and a very fun show.

The Connors is better then I expected. However, like a good pizza the cast is the toppings, Roseanne is the pizza sauce that should be blending all these wonderful toppings together to make a great pizza. ABC over reacted and calmer heads should have made wiser/calmer decisions in the light of day. Roseanne is sadly missed and it shows on the show. It’s good but could be so much better with Roseanne. There is a fixable hole in all of this. I don’t believe she is a racist, she is human and made a very bad decision in tweeting her… Read more »

Well said! ABC over reacted. I hate racists, but i think she is just the victim
Of a really awful regrettable joke! She doesn’t strike me as a bad person or a racist. Even if she does lile Trump. Nobody’s perfect! I would like to see her ghost come back and haunt the family once in a while!

Please cancel this show! Rosanne made the show period. So much more is said about the President and they are still on ABC. She should of not been fired! Cancel The Connors!

I don’t believe ABC will cancel it cuz they will look like fools, which they are! It is not up to the Roseanne Show & I feel sorry for John Goodman. Sara Gilbert is no star & no actor!

God im so glad many people dont agree with that!

I was skeptical at first but wanted to be fair and give it a chance. I actually like it, but to be honest, without the kids. The main characters carry it well without the new additions.

Should be called Darlene. Please cancel and bring back Roseanne!

love love love this show. so much better than the reality TV thats all over the television these days. hoping it does NOT get cancelled!!

I think it is the worst show on network tv, can it, it stinks as do the so called over paid actors.

I think it is the worst show on network television, it needs to be canceled asap, all of the so called actors stink to high heaven, except John Goodman, will never watch it again.

I HATE The Conners. The original show was named Roseanne for a reason. So, Becky’s a drunk, Darlene’s a judgemetal, overly sarcastic, B O R E and I hate Harris. DJ is still a non-character. Then, there’s poor Dan. He is a superb actor who, unfortunately, is stuck. He worked so beautifully with and off of Roseanne.
The show needs to OFF itself in the same unclever manner that ABC killed Roseanne, their cash cow. And finally,
I will NEVER watch ABC ever again.
PamelaSuPamericanMe

CANCEL IT! The show SUCKS!