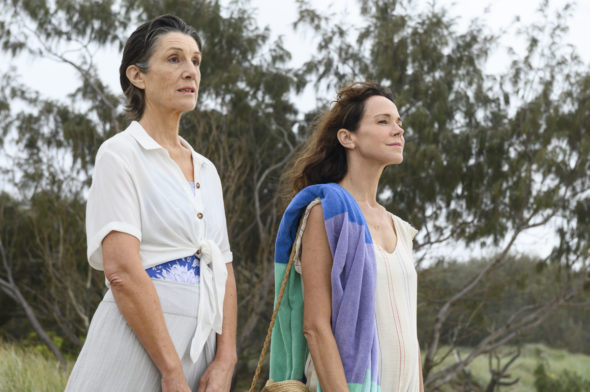 TV show description:
A dark comedy-drama series, The End TV show originates in Australia and was created by Samantha Strauss. It’s a story about family, ethics, and emotion, and mostly how it’s never too late to start again.

The story follows three generations of a family as they live with separate but intersecting obsessions — trying to figure out how to die with dignity, live with none, and make it all count.

Dr. Kate Brennan (O’Connor) is an Australian-based specialist in palliative care. Euthanasia is a hot-button topic in Kate’s field of work, and she is passionate in her opposition to it.

On the other side of the world, Kate’s mother, Edie Henley (Walter), feels just as strongly about her right to die. Kate has little choice but to ship Edie out from England and deposit her in Australia’s Gold Coast in a nearby retirement community and that’s Edie’s worst nightmare.

While Kate struggles with her own problems, her children — one of whom is a teenage trans boy — are trying to work out who they are and who they want to be.

What do you think? Do you like The End TV show? Do you think it should be cancelled or renewed for another season?

The end is a really good show! Different and interesting and sheds light on a sensitive topic euthanasia and our right to die on our terms. Very very good show please don’t cancel it. Love the acting, love the characters all their differences. It is one of the best and most unique shows on TV now