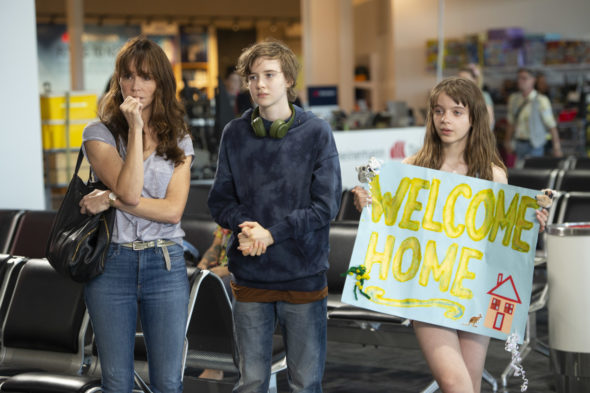 Can this family learn to understand each other in the first season of The End TV show on Showtime? As we all know, the Nielsen ratings typically play a big role in determining whether a TV show like The End is cancelled or renewed for season two. Unfortunately, most of us do not live in Nielsen households. Because many viewers feel frustrated when their viewing habits and opinions aren’t considered, we invite you to rate all of the first season episodes of The End here.

A Showtime dark comedy-drama, The End TV show originates in Australia and stars Harriet Walter, Frances O’Connor, Noni Hazlehurst, Roy Billing, Robyn Nevin, Luke Arnold, Morgan Davies, Ingrid Torelli, John Waters, Brendan Cowell, and Alex Dimitriades. The story follows three generations of a family as they live with separate but intersecting obsessions — trying to figure out how to die with dignity, live with none, and make it all count. Dr. Kate Brennan (O’Connor) is an Australian-based specialist in palliative care. Euthanasia is a hot-button topic in Kate’s field of work, and she is passionate in her opposition to it. On the other side of the world, Kate’s mother, Edie Henley (Walter), feels just as strongly about her right to die. Kate has little choice but to ship Edie out from England and deposit her in Australia’s Gold Coast in a nearby retirement community and that’s Edie’s worst nightmare. While Kate struggles with her own problems, her children — one of whom is a teenage trans boy — are trying to work out who they are and who they want to be.

What do you think? Which season one episodes of The End TV series do you rate as wonderful, terrible, or somewhere between? Do you think that The End should be cancelled or renewed for a second season? Don’t forget to vote, and share your thoughts, below.

I loved this show. Please don’t leave us hanging.

I found the first season of The End intriguing , I Binged watched all ten seasons!

I’ve watched the full season of The End. I do not understand the finale end with them all in the ocean. I’ve tried to go into computer but it does not have synopsis or recap for the show

Open your mind to what they have all been through. Swimming naked gives you a sence of freedom.