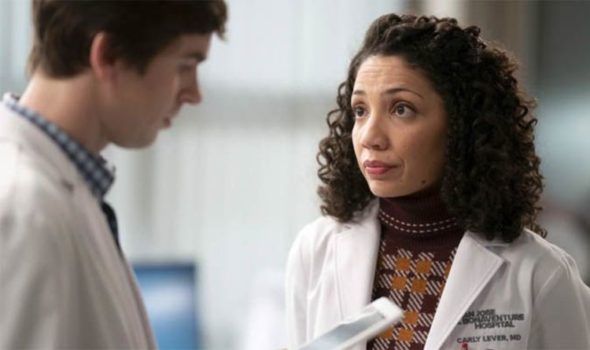 Get ready to see a lot more Carly. TVLine reports Jasika Nicole has been promoted to series regular for season three of The Good Doctor.

The audience wants to see Shaun with Lea [together], and I kind of do, too, but we’ll see where that goes. At a certain point, I was going, ‘Oh, the audience is going to hate me for not having him ask Lea out,’ but then I thought just seeing him ask anybody out — and Carly is someone we care about, and somebody who cares about Shaun — is going to be a lovely victory. All [of those romantic pairings] are on the table and continue to be on the table as we go forward.”

Season three of The Good Doctor premieres on ABC on September 23rd at 10 p.m. ET/PT.

What do you think? Do you watch The Good Doctor? Are you looking forward to season three?

I absolutely love the Good Doctor and can’t wait for season 3 !!

I love the Good Doctor !! I can’t wait for the next season. When Shaun’s Dr. guardian possible died from his CA, then Shaun will need to have someone on his life so why not Lea or Carly.

Love this Show!!! Don’t ever Cancel it!!! I have an Autistic brother so this just hits me right in the Heart ❤️

Love this show. Can’t wait for its return.

Yes! Our house is ready for season 3 of The Good Doctor!!

I love The good doctor! I’m looking forward for next season.

I love The Good Doctor. It shows that people with what’s considered a disability can lead a normal life and have a successful career. So looking forward to the new season!

The Good Doctor is my favorite show..many more seasons, please!

Look forward to season 3.
I have an autistic grandson and I am so proud of him. Now I am proud a TV show is showing there are people that are so special and so awesome and they to can do so much.

I also love THE GOOD DOCTOR. Keep it coming!

I REALLY enjoyed the Void Dr. Ready for season 3.

Yes love watching the Good Doctor and ready for it to return.

I like The Good Doctor because it shows that you don’t have to be perfect to do a good job.Please type here to add a comment. (Note: spam, name-calling, and personal attack comments will be deleted.)…