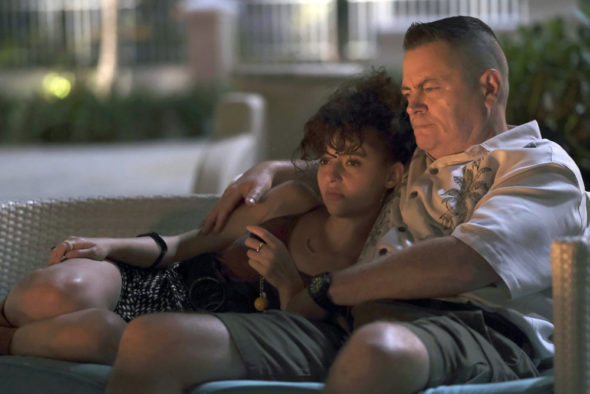 This unsolved mystery could help save a marriage in the first season of The Resort TV show on Peacock. As we all know, the Nielsen ratings typically play a big role in determining whether a TV show like The Resort is cancelled or renewed for season two. Peacock and other streaming platforms, however, collect their own data. If you’ve been watching this TV series, we’d love to know how you feel about the first season episodes of The Resort here.

A Peacock darkly comedic thriller series, The Resort TV show stars William Jackson Harper, Cristin Milioti, Nick Offerman, Skyler Gisondo, Ben Sinclair, Parvesh Cheena, Luis Gerardo Méndez, Nina Bloomgarden, and Gabriela Cartol with Debby Ryan, Dylan Baker, Michael Hitchcock, and Becky Ann Baker in recurring roles. The story follows Noah (Harper) and Emma (Milioti), a young couple who is vacationing at the Oceana Vista Resort in the Mayan Riviera for their 10th anniversary. They’re both teachers and while Noah is content just coasting through life, Emma is thinking there must be more than this. Their marriage is tested when they are drawn into the 15-year-old unsolved and bizarre mystery of two American teens that went missing.

What do you think? Which season one episodes of The Resort TV series do you rate as wonderful, terrible, or somewhere between? Do you think that The Resort on Peacock should be cancelled or renewed for a second season, possibly with a new story?