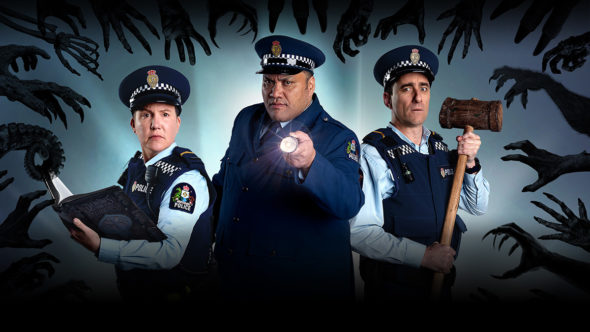 TV show description:
A comedy-horror mockumentary series, the Wellington Paranormal TV show was created by Jemaine Clement and Taika Waititi. The program is a spin-off of the 2014 What We Do in the Shadows film and the TV series of the same name that followed.

The story follows the adventures of Officer Kyle Minogue (Minogue) and Officer O’Leary (O’Leary). The pair are hard-working members of the Wellington constabulary’s paranormal unit who, under the supervision of Sergeant Ruawai Maaka (Pohatu), investigate supernatural occurrences that arise in the capital of New Zealand on a surprisingly regular basis.

Series Finale:
Episode #25
This episode has not aired yet.
First aired: TBD

What do you think? Do you like the Wellington Paranormal TV show? Do you think it should be ending or be renewed for a fifth season?

Please renew to show seasons 3&4!¡ This show is the funnest thing I’ve seen in a while, it’s the perfect love child of a cops/x-files/the office menage a trois.

I LOOOOOVE this show! Wellington Paranormal and WWDITS are the funniest things on American television right now, bar nothing. PLEASE keep them going!!!