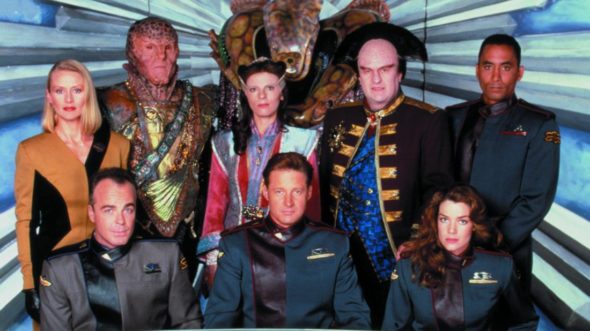 With all these reboots, does Babylon 5 stand a chance of returning? Recently, creator J. Michael Straczynski addressed the possibility of a revival for the TV show, CinemaBlend reports.

The sci-fi series depicted the human and alien staff of a space station. The cast included Jerry Doyle, Michael O’Hare, Bruce Boxleitner, Claudia Christian, Mira Fulan and Stephen Furst. The show ran on PTEN from 1994 to 1997 before switching to TNT for its final season in 1998.

On Twitter, Straczynski said a Babylon 5 revival would never work:

Won't work. They literally told my agent "We have no plans, and no intentions, of letting anything else be done in terms of television with Babylon 5." And a kickstarter wouldn't pay for even a fraction of a season. That won't change for years, when those execs are dead/gone. https://t.co/NZ80WiIIcR

What do you think? Are you a fan of Babylon 5? Would you watch a revival?

Of course, there’s scores of old and new fans. Ones that watched every new episode, patiently waiting the week to see. Along with sci-fi fans too young at time and have come to appreciate great sci-fi. Fans lap up the books, canon stories, and fan-written stories,(some are really good). The trials the cast/writers had to go through not knowing if there was a season 5. The biggest disappointment is Warner Bros. having the rights. As a technomage series, telepath series, ranger series(better done than LOTR), and so much potential in a universe where newbies could enter and not be confused.… Read more »

I found Babylon 5 on reruns just before 911. I had accidentally found it as I perused the channels of my TV. It became an instant favorite. It also gave me an answer that my fear of success had kept me from me for a long, long time. I had the experience of growing up in the most extraordinary place in my life. My grandfather was the live in caretaker and manager of the WINCHESTER MYSTERY HOUSE in San Jose, California. I spent all of my school summer vacations there and had amassed a great number of personal stories from… Read more »

Without a doubt one of my favorite TV series ever!
I would definitely watch a reboot of Babylon 5 it was better than a vast majority of shows of the day and certainly far better than most of the trash being offered to us today.

Absolutely would love a reboot, sequel, expansion, or any other access to this wonderful universe. I still watch the originals after seeing them more than a dozen times. One of the very best series ever.

I would definitely watch a revival and/or a reboot if it also included the telepath and drakh wars. Such a wonderful story deserves a second chance in the 4K world.

I tell people to scan through season 1 to get the backstory, watch season 2-4, and forget about season 5 since it’s more an afterthought than a continuation of the sage. B5 was a great show, esp season 2-4, and should not be redone. But if a sequel and/or prequel to the saga were done well (unlike Crusades), I’d watch.

Forget a reboot or continuation just remaster the original to 4k. I would back that kickstarter!

Unfortunately, while the live action was done at 16:9 and HD (for the time) the original CGI was only done to standard definition at 4:3 ratio to save money. It would cost tens of millions of dollars to make the series 4K because every bit of the CGI would have to be redone from scratch. That’s why we’ll never see it on Blu-Ray, the visual effects simply weren’t done at a high enough resolution. There simply wouldn’t be enough sales to justify the enormous cost. Warner Brothers has certainly blown it as far as merchandise is concerned.

actually, it wouldn’t cost too much say around $30k per episode for 4k upscaling and a CGI reshoot. it would cost around 3 million to do all 5 seasons. CGI is not that expensive today a guy can pump out a 15 min CGI video in a few days worth of work that looks 100x better for youtube.

I would submit another reason for not bringing back the series. Although I would agree that Seasons 1-4 (especially 2 & 3) were some of the best science fiction ever done for TV, season five and Crusade frankly sucked rocks. Some of the two-hour movies like Thirdspace were god awful. If we can bring back the quality of writing and production as seen in seasons 1-4, I am all for it, but Straczynski got sloppy later on. There is also the simple fact much of the good cast are unfortunately gone. By all means, I like to see more done… Read more »

The second half of Season 5 was back to form and powerful, once it was finally dealing with Londo, G’Kar, and Centauri Prime.

A revival yes, but not a reboot. The Telepath War, David Sheridan’s story, heck even finish Crusade.