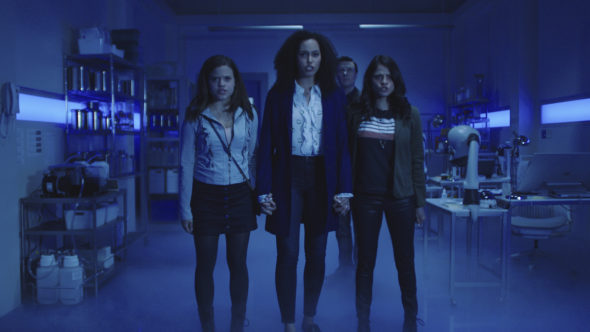 Does the Power of Three still hold? Is the Charmed TV show cancelled or renewed for a second season on The CW? The television vulture is watching all the latest cancellation and renewal news, so this page is the place to track the status of Charmed, season two. Bookmark it, or subscribe for the latest updates. Remember, the television vulture is watching your shows. Are you?

The first season of Charmed averaged a 0.26 rating in the 18-49 demographic and 850,000 viewers. Learn how Charmed stacks up against the other CW TV shows.

Will The CW cancel or renew Charmed for season two? The ratings have been pretty good (for a CW show on a new night) so I think it will be renewed. I’ll keep an eye on the ratings and update this page with breaking developments. Subscribe for free Charmed cancellation or renewal alerts.

Not particularly thrilled with the writing. The movements for their powers seem strange and not natural. The acting is pretty good but it’s just not quite as good as the original. I like the new girls and the varying interests. But if it got canceled I wouldn’t miss it.

I like the show, at first I was skeptical. But I gave it a chance and it was better than I thought.

I like the show, at first I was skeptical, but gave it a chance and it was better than I thought.

Ugh , I just really wanted to see an extended version of the 1998 Charmed . See Wyatt and Chris older and maybe even phobes kids . I watch the old charmed over and over again , it’s still so amazing !! This new one gives me nothing. It doesn’t spark any interest . I even tried watching it ??? No please do the fans a favor and bring back the cast !!

I watched the first episode and wanted to vomit. Much like the “Footloose” reboot, it was an insult to my intelligence.

Should of been cancelled.
As with most people I’m a fan of the original. Should have made a series on the next generation, in collaboration with the original cast and all generations would watch it! Not this pathetic re.make… have writers lost their creativity with the number of re.makes coming out… just seen there’s a re-make of Benji…not even spared animals the embarrasment of re.makes…

This show sucks and the reboot should be cancelled. It’s a disgrace and an insult to the original Charmed. I stopped watching after the first episode tried to watch the next episode but it was so bad.

Give this show a chance,I did,and its not bad at all.First episode and the last one are totally different they develop,action,mistery,magic,twists.It’s great now 🙂

Couldn’t agree more! I’ve said for years they should do a Charmed Next Generation and not a remake or spin off

i agree with on that i think they should of come up with something better..

Why is the new show charmed on repeat. There has been 11 episodes. There are supposed to be 22. And it repeating starting episode 3

Please keep charmed on. It is a good show.

I really like the new charmed. It is great.

This is just garbage. “How can I trust my powers if I
can’t tell my boyfriend is a demon”. Blah.
Poorly delivered lines. No chemistry. Awful story line and background.

Such great source material for so many reboot options.

Agreed, this reboot is an ill-conceived dumpster fire! The graphics depart from the source material but are still completely unoriginal. The writing is bad pulp feminism with no actual awareness or intelligence behind it and the constant attempts to “science” the spell work are offensive. It also doesn’t help that they’ve aged down the show so anyone who was a fan of the last series is to mature to watch this new one.

I saw a fan made video which presents a far better reboot idea. Using show clips and shows the actors and actresses have done in recent years and added them into a perfect idea for a great reboot of Charmed. It concerns Wyatt’s paternity, and it is brilliant. If they had been more concerned with telling a story rather than being political it would have been entertaining. I watch shows and movies to escape the state of the world rather than be inundated with it. Many shows are great without getting into real world politics and still pull off telling… Read more »

The OG charmed is and always will be the best this new one sucks they over act and there’s no feeling about it what so ever with the OG charmed you felt every emotion and action but with this new one you think what the he’ll was that crap everything about the new charmed sucks bring back the originals because they will do a much better job listen to the true fans of the OG show not the fans of this new crap do the right thing and get the new show cancelled.