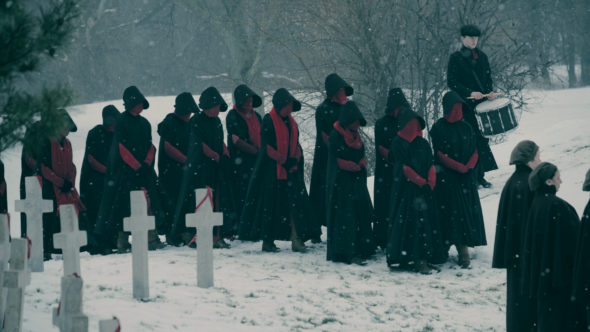 How goes Offred’s struggle for freedom during the second season of The Handmaid’s Tale TV show on Hulu? The Nielsen ratings would typically play a big role in determining whether a TV show like The Handmaid’s Tale is cancelled or renewed for season three. Hulu and other streaming platforms, however, collect their own data. If you’ve been watching this TV series, we’d love to know how you feel about The Handmaid’s Tale season two episodes. We invite you to rate them for us here.

A Hulu drama based on the Margaret Atwood novel, The Handmaid’s Tale stars Elizabeth Moss, Joseph Fiennes, Yvonne Strahovski, Samira Wiley, Alexis Bledel, Max Minghella, Madeline Brewer, Ann Dowd, and O-T Fagbenle. The dystopian tale tells the story of life under the totalitarian government of Gilead, which was formerly part of the U.S. The catastrophic state of the environment has devastated the birth rate, so fertile women have become a commodity enslaved by the ruling class. The second season centers on Offred’s (Moss) pregnancy and her battle to ensure freedom for her future child. Gilead matron Aunt Lydia (Down) is fond of saying, “Gilead is within you.” Now it is up to Offred and the resistance to triumph over this evil regime, lest they succumb to it.

What do you think? Which season two episodes of the The Handmaid’s Tale TV series do you rate as wonderful, terrible, or somewhere between? Should Hulu cancel or renew The Handmaid’s Tale for a third season? Don’t forget to vote, and share your thoughts, below.

I love this show it shows how much strength a woman actually can have in any circumstance. This show must go on to a season three. It truly shows a womans worth no matter what happens.