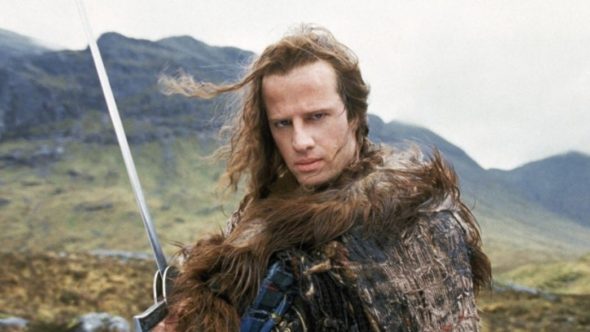 Turns out, there can be more than one. SyfyWire reports there may be another Highlander TV show in the works.

Already, there have been two series in the Highlander franchise, which is based on the original 1986 movie and follows the immortal being Connor MacLeod. The first show, Highlander: The Series, ran from 1992 to 1998 while a spin-off, Highlander: The Raven, only ran for one season before ending in 1999.

According to Syfy, there may be a Highlander series reboot in addition to the already announced film reboot. In a recent interview, director Chad Stahelski says the upcoming movie may lead to a series:

We’re trying to design in a way that gives us a little more lead-in, a little more time with the mythology and see some of the best characters. They did seven seasons of TV, and even though the TV show may not hold up today, the idea of it and the characters they brought in were super cool. So we’re trying to devise a methodology that leads up to The Quickening. You just don’t end with a one-on-one battle in New York, cut off a guy’s head, and that’s it. We want to do this in such a way that it becomes more of a series, whether it’s short form or long form, that would let us explore that in the best way. I have a huge, heartfelt love and respect for the project, so we’re trying to find the best way to do it to give fans what they want.”

What do you think? Are you a fan of the Highlander franchise? Would you watch a new series?

I was lucky enough to be at the World Premiere of the original film.

The TV versions haven’t really done justice to the film though, so I hope that careful thought goes into this.

Woo! Loved the movies and the series can’t wait. Just please no annoying street toughs who need mentoring really didn’t like, what was his name Richie? Other than that go HIGHLANDER.

Would love to see Highlander return!!!

I was wondering if someone would be rebooting it. Will watch it. Loved the movies and the show.

Am a very big fan of all things Highlander. Adrian Paul was perfect and will be hard to cast anyone else. I just hope the reboot will be done right and not be cheesy and stupid as most seem to end up. There is a mystery and old world mystic that should be captured. Leave out overkilled special effects and stupid twists in the plot