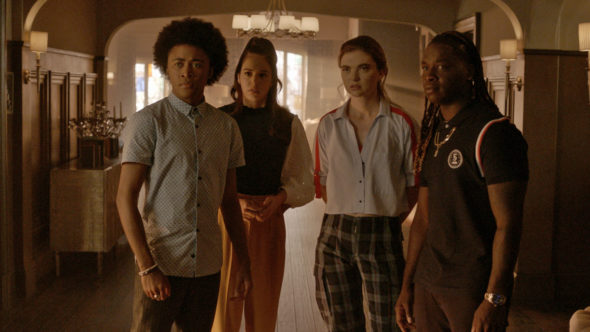 What’s ahead for the Super Squad and their school? Has the Legacies TV show been cancelled or renewed for a fifth season on The CW? The television vulture is watching all the latest cancellation and renewal news, so this page is the place to track the status of Legacies, season five. Bookmark it, or subscribe for the latest updates. Remember, the television vulture is watching your shows. Are you?

Airing on The CW television network, the Legacies TV show stars Danielle Rose Russell, Jenny Boyd, Kaylee Bryant, Quincy Fouse, Aria Shahghasemi, Chris Lee, Leo Howard, Ben Levin, and Matthew Davis. This show is set in the Salvatore Boarding School for the Young and Gifted in Mystic Falls, a haven for supernatural beings to learn to control their impulses and abilities. The ongoing story follows a new generation of supernatural students (like vampires, witches, and werewolves) as they learn what it means to be special in a society that wouldn’t understand their gifts. They include Hope Mikaelson (Russell), Lizzie Saltzman (Boyd), Josie Saltzman (Bryant), MG (Fouse), Kaleb (Lee), and Landon Kirby (Shahghasemi). Josie and Lizzie’s father is Alaric Saltzman (Davis), the human headmaster of the school.

The fourth season of Legacies averaged a 0.08 rating in the 18-49 demographic and 370,000 viewers. Compared to season three, that’s down by 35% in the demo and down by 32% in viewership in the live+same day ratings (including DVR playback through 3:00 AM). While these numbers don’t include further delayed or streaming viewing, they are a very good indicator of how a show is performing, especially when compared to others on the same channel. There can be other economic factors involved in a show’s fate, but typically the higher-rated series are renewed and the lower-rated ones are cancelled. Find out how Legacies stacks up against other CW TV shows.

Will The CW cancel or renew Legacies for season five? This show has been a good performer for the network in the past and The CW has been renewing most of their shows year after year. This series fits well with the rest of the network’s programming so I think it has a very good chance of being renewed. I’ll update this page with breaking developments. Subscribe for free alerts on Legacies cancellation or renewal news.

What do you think? Were you hoping that the Legacies TV show would be renewed for a fifth season? Are you sorry that The CW cancelled this TV series, instead?

They should definitely renew it! I love Legacies!!! And it’s now at is best!

Legacies is the WORST SHOW EVER!it should be cancelled!

Like this show a lot. It’s different, new, and fun.

They should renew it. It just started to get really good again. It is literally the only show I look forward to every week. I really hope s4 ep10 don’t get anymore delayed!!!

I hope it’s renewed. This season has actually been better than the first 3!

Legacies is my favourite show on tv. I need there to be a 5th season and another and another. Best show out of the previous two.

I really hope that the show doesn’t end. Love this show

Why would you end it like this, we need closure!!! And I love this show, plz renew

I want there to be a season five so bad. I will literally cry if Alaric doesn’t come back. I would also like to see Klaus.

I would be upset if Legacies was cancelled. One of my favorite shows on TV.

i’d be devastated if it ended now! we need a season five….and six, and seven!

I hope so I’m addicted to it

I hope there is more! I love this show along with the others. Hope to see a season 5!