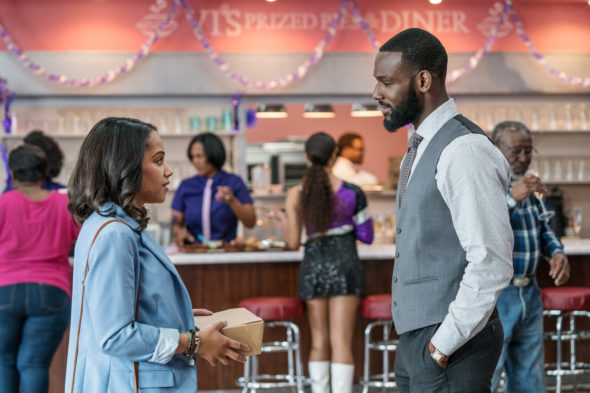 Queen Sugar will return with more family drama in 2021. The cast and crew of the OWN TV series has resumed production on the series’ fifth season order of 10 episodes.

Work had been underway on season five of the Ava DuVernay series in March when the pandemic caused the shutdown. The new episodes, which will air sometime in 2021, will address the impact of Black Lives Matter, COVID-19, and the November election on the Bordelon family and their community. Several female first-time directors have been hired to film the season.

Los Angeles – OWN: Oprah Winfrey Network announced today that production will resume in New Orleans for the fifth season of the critically acclaimed series “Queen Sugar” from creator Ava DuVernay. Produced by Warner Bros. Television and ARRAY Filmworks, “Queen Sugar” previously began filming in March 2020 before shutting down due to the COVID-19 pandemic. The lauded series, executive produced by DuVernay and Paul Garnes, has resumed production on the remainder of the 10-episode season, with the series slated to return to air on OWN: Oprah Winfrey Network in 2021.

As filming halted and the world faced multiple upheavals throughout 2020, DuVernay decided to completely revamp the season to address the very real issues our country is facing through the lens of the beloved Bordelon family and the fictional community of St. Josephine. DuVernay reconceived the character arcs and storylines, writing alongside returning showrunner Anthony Sparks and co-executive producer Norman Vance to tackle head-on the COVID-19 pandemic, the Black Lives Matter protest movement that swept the country, and the lead-up to elections to showcase the specific impact and ramifications these issues have on communities and people of color. Through it all, viewers will see the joy around the pain, and humanity’s ability to persevere and find light in the darkest of times.

The fifth season’s directorial lineup includes previous “Queen Sugar” episodic director Lauren Wolkstein, who has been promoted to producing director, alongside helmers Lisa France and Cierra Glaude. This season continues DuVernay’s initiative since the series’ inception to hire an all-female directing team, 32 of whom made their television directorial debut on the series. The inclusive hiring extends in front of and behind the camera, with female department heads from casting to post-production and music supervision.

“Queen Sugar” was recently recognized by the Television Academy Honors for its powerful portrayal of an African-American family in the Deep South that sheds light on complex issues and challenges facing our society. Led by the talented cast of Rutina Wesley, Dawn-Lyen Gardner and Kofi Siriboe, “Queen Sugar’s” storylines have delved into important topics such as police brutality, addiction and recovery, and systemic racism. The series has additionally been awarded the NAACP Image Award for Outstanding Drama Series, and for three consecutive years was named Best TV Show Drama by the African American Film Critics Association (AAFCA) and nominated as Television Show of the Year by the American Black Film Festival (ABFF).

The first four seasons of “Queen Sugar” are available to stream exclusively on Hulu, making it possible for viewers to catch up on all past episodes.

About the directors of “Queen Sugar”
Lauren Wolkstein directed her first episode of television on “Queen Sugar” Season 3, and has since been upped to producing director, helming five episodes this season. Wolkstein is a NYC-based filmmaker originally from Baltimore, Maryland. In 2017, her debut feature “The Strange Ones” premiered at SXSW to critical acclaim, which she co-directed with Christopher Radcliff based on their Sundance short of the same name. Lauren’s previous shorts, including “Social Butterfly” (Sundance ’13) and “Cigarette Candy” (SXSW ’10 Grand Jury Prize), have played festivals around the world. Following her television directorial debut on “Queen Sugar,” she directed episodes of “Cloak and Dagger” and “Dare Me.” In 2013, Filmmaker Magazine listed her as one of the “25 New Faces of Independent Film.” Wolkstein is a Women at Sundance Fellow through the Sundance Institute and a MacDowell Colony Fellow. Lauren earned her MFA in film directing from Columbia University and is now an Associate Professor of Film and Media Arts at Temple University.

Lisa France directed her first feature film, “Anne B, Real,” in 2003, which won more than 30 film festival awards and nominations, including two Independent Spirit Award nominations (Debut Performance and the John Cassavetes Award). She then filmed “Love and Suicide” in Cuba before its theatrical release through AMC Select, and “The Unseen,” which sold to Netflix, Starz and Encore. Her award-winning short film debut “Love in Tow” starred Zach Braff and Quentin Crisp. Her first documentary, “Roll with Me,” which also garnered numerous awards, debuted at The Woodstock Film Festival and was a 2018 Slamdance Official Selection, later acquired and distributed by ARRAY Releasing. “Queen Sugar” marks France’s television directorial debut.

Cierra Glaude made her directorial debut in 2017 at UrbanWorld Film Festival with her short “Last Looks,” starring Rutina Wesley (“Queen Sugar”), which was featured on Issa Rae’s YouTube Channel as a part of the #ShortFilmSunday lineup. In 2019, she was selected by Lena Waithe for the AT&T Hello Labs Filmmaker Mentorship Program, where she directed a short film titled “Spilt Milk,” featuring Dasha Polanco (“Orange is the New Black) & Zuri Adele (“Good Trouble”). Hailing from Mobile, Alabama, Glaude received her start in the industry with an opportunity to work alongside Ava DuVernay on feature film “Selma” in 2014, making the decision to leave The University of Alabama a year early to pursue her passion in film. She then worked various crew positions on the sets of “Girls Trip,” “Twenties” and “A Wrinkle in Time.” After serving various production roles on DuVernay’s “Queen Sugar” over multiple seasons, Glaude was tapped by the show’s creator to direct three episodes of season five, marking her television directorial debut.

About Queen Sugar
From award-winning filmmaker Ava DuVernay (16-time Emmy nominated “When They See Us” and romance anthology series “Cherish the Day” for OWN), the contemporary drama “Queen Sugar” features the Bordelon family who are fighting to save their family farm to preserve their father’s legacy while navigating their own personal journeys. In season five, Charley (Dawn-Lyen Gardner) remains thick in the battle with the Landry family as she uses the system of local government to protect the community and the farmers who own land, while coming to terms with her son Micah (Nicholas Ashe) as he navigates his freshman year at Xavier University, an HBCU. Nova (Rutina Wesley) launches her new website to support the community while moving out of the Ninth Ward and settles into her romantic relationship with Calvin (Greg Vaughn). Ralph Angel (Kofi Siriboe) works to manage fatherhood with son Blue (Ethan Hutchison) and a healthy path forward with girlfriend Darla (Bianca Lawson) despite constant threats to his land and home.

“Queen Sugar” is produced for OWN by ARRAY Filmworks and Harpo Films in association with Warner Bros. Television. The season five executive producers are Ava DuVernay, Oprah Winfrey, Paul Garnes and Anthony Sparks. The series is based on the book by Natalie Baszile.

About ARRAY
Founded in 2011 by filmmaker Ava DuVernay, ARRAY is a multi-platform arts and social impact collective dedicated to narrative change. The organization catalyzes its work through a quartet of mission-driven entities: the film distribution arm ARRAY Releasing, the content company ARRAY Filmworks, the programming and production hub ARRAY Creative Campus and the non-profit group ARRAY Alliance. www.arraynow.com

What do you think? Do you enjoy the Queen Sugar TV series? Are you looking forward to seeing season five on OWN in 2021?

yes, I love this show. Please bring us more!

Happy to know the show is returning! Looking forward to watching new episodes!

Love the show. Glad it wasn’t canceled. So many black shows on TV but this is one of the good ones

I love this show,i have prayed that it would come back on again.Queen Sugar is coming back when more than ever we need great show’s like this to unite people,2020 has been a awful year,2021 will be better,We will get through this together,Thank you for the OWN channel.

I cannot wait for 2021 to be here, already. I love the writing, the story lines, the whole acting cast. I’m glad it’s not canceled…I love all the shows; Queen Sugar, wrinkle in time, cherish the day, was so good, I am hoping for that series to come back to life! I watch Own channel way too much, my husband says…. but if you were to analyze between me watching my own shows, compared to his car shows, racing, and Marvel,, well…I watch TV small-time. Lol!! Hats off to all the creators, directors, all the cast, which ain’t not a… Read more »

I love this real, down to earth show. It shows what’s happening in the lives of Black folks. Thank you for providing this show to us. I really, really enjoy and look forward to it returning. It’s been too long!! Keep up the good work.

I just need the date and time.

I love Queen Sugar I can’t wait for season 5 . I never miss watching when it’s on.

I can’t believe that OWN is renewing this boring show and CANCELLED Ambitions. From all the people that saw the show wants it to be renewed

I can’t wait! This is my favorite show.

I can’t wait to see the Queen Sugar 5 season.