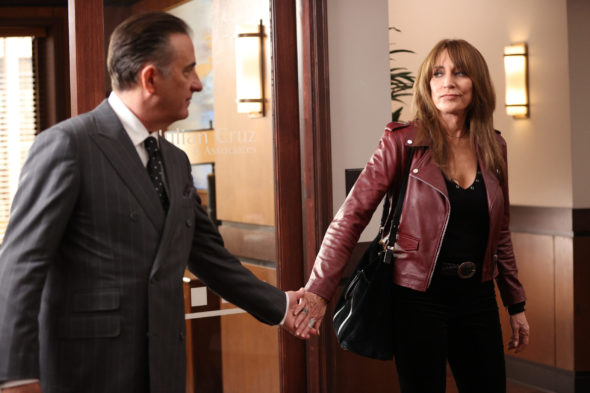 Erwich said the following about the cancellation of the four shows, per Deadline:

“They are all unique shows who on their own specific timeline where they are creatively and with the audience. I can say that just because we are not ordering new seasons does not take anything away from the impact that these shows had creatively or how many fans they have on ABC. These are difficult business decisions but we are really proud of the runs that all of these shows had.”

As for Rebel, Erwich did speak about that series directly. The series was canceled after airing just four episodes. Katey Sagal, Erin Brockovich and Krista Vernoff all spoke out after the Thursday night series was cancelled. Erwich said the following about the still airing ABC series:

“Krista Vernoff is not just an amazing talent, she is a valued and beloved part of the Disney family. We gave Rebel a really considerable launch and a launch effort. It was a huge priority for us for midseason. One of the advantages of a stable schedule is, you can focus and platform new shows, which Rebel was a beneficiary of Unfortunately, it did not garner the audience that we needed it to do, so we had to make that decision.”

For Life is being shopped to other outlets, and the same could happen for Rebel.

What do you think? Do you wish ABC had kept these four shows for next season? Would you watch any of them on new homes if they are saved?

I watched the first 10 minutes of Rebel and that was enough for me.

I watched Rebel faithfully and love the show. Sure do hope that another Network picks it up. If the show continues elsewhere I am Following!! My fingers are crossed.

Rebel is such a great show! You are idiots for canceling it or anything Katey Sagal is in. I hope another network picks up this treasure. I tune in to every show & binge watched them today so my husband could catch up.
PLEASE RECONSIDER ❤❤❤

I’m not sure who decides this because I read what people write and usually they feel like me , yet the shows are gone !!!!! Why ? Rebel is good , what’s wrong with you??????

I only watched Rebel. If you asked me to name the other 3 shows, I would have to say, “no idea”.

Rebel and mix-ish was the only two showes I watched, I do not agree with ABC. Katey sagal is absolutely amazing anything she does is gold the show wasn’t given the proper chance it needed. I’m so tires of these networks taking off such great shows abd leaving the bad ones on the air start listening to your viewer’s so many great shows have been cancelled and all these networks don’t seem to care and their lack of taste prove that . REBEL, ALL RISE, PRODIGAL SON, QUEEN OF THE SOUTH, MIX-ISH, BAT WOMEN, AND SO ON. These are amazing… Read more »

Rebel!! No way, that’s a great show, and I loved mixed-ish
UGH!

Don’t cancel Rebel! Best Show, we don’t have much Good any more!!

For life is my favorite show ever. I have looked forward to watching that show since it started. The story lines are about real life that goes on and people on the outside don’t know about it. It was very educational and very entertaining at the same time. The cast played their parts perfect. Please don’t cancel for life. If it us picked up from another broadcast I will be so happy because I really love that show

I liked Rebel and American Housewife so I’m sorry they are being cancelled. I hope you reconsider since we need shows not geared toward all the young people.

I love Rebel and wish it would continue. The characters are awesome. The story is awesome. I actually watch the episodes multiple times because I enjoy them so much. Please keep this show. One of the best shows on TV.

Please continue Rebel /Med ish my granddaughter and I love washing it together/ we need showes that are not violence for our children and grandchildren to be able to watch.ca

I was truly disappointed that Rebel and For Life weee cancelled! I loved both these shows and Rebel had me hoooked from day! I hope another streaming service will pick both of these shows!!