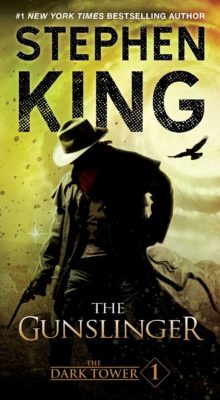 Is The Dark Tower ever coming to the small screen? Recently, executive producer Glen Mazzara discussed the future of the TV show after Amazon passed on it, TV Guide reports.

Based on the novel series by Stephen King, the series follows Roland Deschain, a descendent from a long line of gunslingers, who is tasked with finding the mysterious Dark Tower. The books were previously adapted as a 2017 film starring Idris Elba and Matthew McConaughey.

As reported earlier, Amazon passed on The Dark Tower pilot earlier this year. Recently, EP Glen Mazzara was on an episode of the Kingcast podcast and described how the first episode of the series would look:

In this version he’s chasing Marten because Marten was with Gabrielle, and he’s vowed his revenge… So he chases Marten across the desert and ended up in Hambry. He meets Susan. In the pilot, it’s the Feast of the Kissing Moon and she’s being presented to the mayor, and she meets Roland on the road. Roland goes into Traveler’s Rest. He has the scene [with] Sheemie and Roland get[ting] into a classic western stand-off.”

Mazzara also said he does think the series will be picked up by another network, but nothing concrete has been announced yet.

What do you think? Are you a fan of The Dark Tower novels? Would you watch the TV show?

Yes. Make it. Air it. Or at least air the pilot and let the feedback help determine if it’s worthy of proceeding. We want to see it. We’ve been waiting for decades. Don’t tell me with the writers and film tech today that it can’t be done. You’re not gonna get it perfect. That would be impossible. And I’m sure even the biggest fan can accept minor adaptation differences. We’ll understand. Lol… Just give us our show as it should be: with Eddie and susannah and Susan Delgado and the witch and Callahan and black 13 and calla brim Sturgis… Read more »

I’d be interested in watching the show, but I doubt anyone has the script writing ability to adequately bring King’s books to life. Also, the world in the books is brilliantly imagined and I don’t believe any company has the financial resources to create it for tv or another movie. Also, I’m tired of seeing bad film/tv adaptations of my favorite novelist’s work. So, I won’t hold my breath waiting for it to come to tv.

YES…love the books would enjoy seeing it on tv…I didn’t know it had been and would LOVE to see the episodes I’ve already missed and HERE’S hoping it gets picked up by another network….hopefully one that will advertise it so I know about it 🙂

Yes I would watch.

I was a fan of the Dark Tower series of novels. I’m hoping to see the movie eventually. But if one of the streaming services that I have picks up the tv series I will watch it.