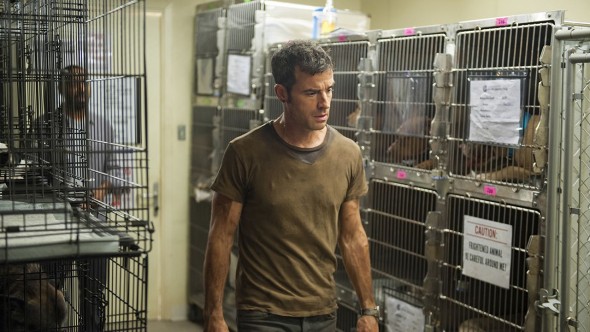 HBO has renewed their low-rated drama The Leftovers for a third season but that will be the end of the series.

HBO RENEWS THE LEFTOVERS FOR A THIRD AND FINAL SEASON

LOS ANGELES, Dec. 10, 2015 – HBO has renewed the critically acclaimed drama series THE LEFTOVERS for a third and final season, it was announced today by Michael Lombardo, president, HBO Programming. Created by Damon Lindelof (Emmy® winner for “Lost”) and Tom Perrotta (Academy Award® nominee for “Little Children”), the series is produced for HBO by White Rabbit in association with Warner Bros. Television.

“It is with great enthusiasm that we welcome back Damon Lindelof, Tom Perrotta and the extraordinary talent behind THE LEFTOVERS for its third and final season,” said Lombardo. “This show has proven to be one of the most distinctive HBO series and we are extremely proud of its unrivaled originality, which has resulted in such a passionate following by our HBO viewers. We admire and fully support Damon’s artistic vision and respect his decision to bring the show to its conclusion next season.”

“I have never, ever experienced the level of creative support and trust that I have received from HBO during the last two seasons of THE LEFTOVERS,” says Damon Lindelof. “Tom, myself and our incredible team of writers and producers put tremendous care into designing those seasons as novels unto themselves…with beginnings, middles and ends. As we finished our most recent season, it became clear to us that the series as a whole was following the same model…and with our beginning and middle complete, the most exciting thing for us as storytellers would be to bring THE LEFTOVERS to a definitive end. And by ‘definitive,’ we mean ‘wildly ambiguous but hopefully mega-emotional,’ as all things related to this show are destined to be.

“On behalf of our incredible crew and superb cast, we are all tremendously grateful that HBO is giving us an opportunity to conclude the show on our own terms…an opportunity like this one rarely comes along, and we have every intention of living up to it. One more thing. We are blessed by the unwavering support of our fans and the incredibly powerful voice of the critical community. We feel absolutely privileged to heat up one last helping of leftovers.”

In the second season of THE LEFTOVERS, the show expanded on the original concept of The Rapture that was explored in Tom Perrotta’s bestselling novel of the same name, continuing to focus on the ways ordinary people react to inexplicable events. Season two told a tale of two families, the Garveys and the Murphys, whose lives intersected in surprising ways, following the Garveys from New York to eastern Texas, where one small town, nicknamed “Miracle,” and its residents had been spared during The Departure.

The finale of the second season of THE LEFTOVERS debuted Dec. 6 on HBO. Among the critical praise, the New York Times hailed THE LEFTOVERS as “outstanding” and referred to it as a “master class,” while HitFix.com deemed the show “TV’s best drama,” as well as “powerful, immersive.” The Hollywood Reporter said that “every performance is superlative,” and TVLine.com hailed the series as “breathtaking, audacious, innovative.” Season two has been included in many Best of 2015 critics’ lists, while Vulture.com has lauded THE LEFTOVERS as “one of the great dramas in American television.”

What do you think? Do you like The Leftovers series? Do you think that season three should be the end?

One of the most creative shows to come along … period. It delves into the spiritual, supernatural, emotions, behaviors, and internal struggles. The characters give you a magnified look at emotions and feelings we all struggle with. The plot keeps you guessing. You can’t just watch one episode, you have the need to keep going because you want to know more. This is truly a great show. Too bad it was cut short. I couldn’t get enough of this one … but that seems to be the way of it, you get attached to specific characters, which pretty much guarantees… Read more »

Starting a petition – one….

It’s a shame that with all the unimaginative television that is on that one of the most creative and interesting shows is being cancelled. I truly hope that whoever made this decision comes to their senses and realizes what a treasure hey have.

Continue from previous post. When I think about all the writers could do to develop the characters and plot further, I’m overwhelmed with ideas. Especially with Kevin. Everyone wants to know more about Mary and Kevin’s family. If anyone departed ever comes back….. what really happened to them. It would be sad to see it end when so much more could be done……story line.

What a shock to learn the Leftovers was cancelled. The show s very creative and imaginary. Great to see a show that actually makes you think about behavior and what my behavior would be if I experience something similar. I wish decision makers would rethink cancelling the show.

I really really like this show, I’m not a tv series kinda person but HBO has left me hanging so much on shows, I really enjoyed the left overs please bring g it back!

Kevin has a twin brother in Sydney! I learned about the Leftovers at conjuror.community 🙂

I truly liked it. I wondered what happen to the show, please continue the show with season 3 and more seasons to come.

I loved this show so much that when it did not come back on again I watched both seasons all over again! Please don’t cancel!

Best show I ever seen. Could relate with each character on multiple levels. The things the characters went through were tremendous. You can’t cancel this show! It’s my favorite!!

This is an excellent series and sad to hear this will be the final season. There were a couple times it was a snooze-fest for some episodes but that’s with all great shows as not to overwhelm. I hope many of the questions get answered and we are not left guessing

“by ‘definitive,’ we mean ‘wildly ambiguous but hopefully mega-emotional”, says Lindof. I hope he does not mean, “just like the ending of LOST”, which was both, but not in a good way. There are red flags.

One of the best shows I’ve have ever seen. I understand how its not for everyone but it is so different that it leaves you anticipating what’s next, so many times in season 2 at the end of the episode I was like WTF? But in a good way, it was very surreal almost like a Stanley Kubrick movie or something. Some might call it religious or fantasy or even scifi, but however you term it is simply riveting. In order to get the show you have to understand the freak out that would happen if 2% of the population… Read more »

Keep it going. I have been waiting

I have been waiting for the next season. you need to renew it