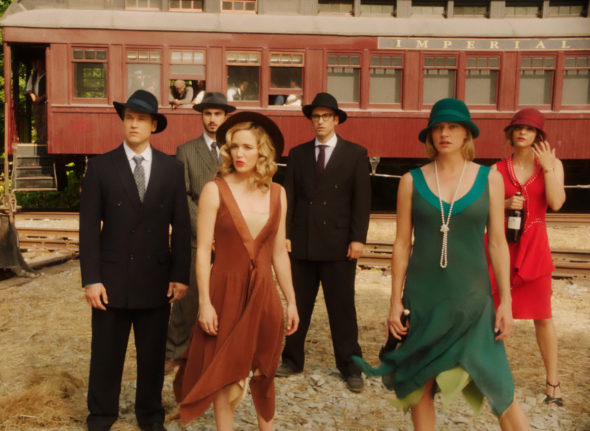 The adventures for the Waverider crew have come to an end. The CW has cancelled DC’s Legends of Tomorrow so we won’t be seeing an eighth season. Season seven finished airing early last month.

A superhero comedy-drama series, the DC’s Legends of Tomorrow TV show stars Caity Lotz, Nick Zano, Tala Ashe, Jes Macallan, Matt Ryan, Adam Tsekhman, Olivia Swann, Shayan Sobhian, Lisseth Chavez, and Amy Pemberton. The series follows a motley group of heroes and villains as they have misadventures across time and space in their stolen Waverider time-ship. In season seven, after saving 1925 Earth from an alien invasion (and getting married), Legends co-captains Sara Lance (Lotz) and Ava Sharpe (Macallan) think they and their crew can finally go home and relax. Unfortunately, their time travel ship gets blown up by a second Waverider, leaving the Legends trapped in 1925.

Airing on Wednesday nights, the seventh season of DC’s Legends of Tomorrow averaged a 0.09 rating in the 18-49 demographic and 528,000 viewers. Compared to season six, that’s up by 11% in the demo and up by 27% in viewership in the live+same day ratings (including DVR playback through 3:00 AM). It was a middle-of-the-road performer when ranked against The CW’s other scripted shows this season.  In the live+7 day ratings, Legends drew a 0.18 demo and 854,000 viewers, picking up 98% and 62% more viewers in those categories, respectively.

The cancellation news comes as Warner Bros. Discovery and Paramount Global are looking to sell the network.  There’s been speculation that CW would not be renewing as many shows as it has in the past few years. Batwoman was cancelled earlier today and additional cancellations are likely on the way.

Co-showrunner Keto Shimizu announced the Legends cancellation on Twitter and members of the cast and crew later shared their reactions to the news.

Thank you to our fans; your love and passion for our strange band of misfits has made every break, every script, every daily, every cut, and every mix worth all the hard work. We see you, we love you, and you’ll always have a place on the Waverider. ❤️

After 7 seasons, our journey has come to an end. I’m at a loss for words, so I’ll just post the last image ever to be filmed on the Waverider. Seems fitting. #legendsoftomorrow pic.twitter.com/1Iu9bArMU3

I also got surprising opportunities out of it. I got to write for DC Comics. I got to run our writers room Twitter and turn it into the shitposting monstrosity it is today. And I got to engage with thousands of amazing fans from all over the world. What a privilege!

I'm gonna miss this show something fierce. We had so many more stories to tell and I can only hope we'll one day find a way to tell them. But for now, all I can say is: thank you, Legends of Tomorrow ♥️

Gutted to not have a proper goodbye with the Legends family, but grateful for the time we had together. Good reminder that we’re not promised anything. (2/4)

Thanks to the cast & crew for making this newbie feel welcome on the Waverider. And thanks to our amazing fans for all their love & support! #LegendsNeverDie 2/2

What do you think? Have you kept up with the DC’s Legends of Tomorrow TV show on The CW? Are you sorry to hear that the show’s not been renewed for season eight?

Y’all really need to start reading what goes on behind the scenes of your shows so that things like this don’t surprise you when they happen. Time and again I read the same comment every time something is canceled. educate yourself a little bit and these things won’t be as surprising. Netflix is having Financial issues and yes the show is a CW Show Netflix was paying for the episodes So in effect Netflix was the one producing the show. And the WB is Under New Management so they’ve started to cut things that they don’t see as profitable. And… Read more »

Shame this was great show some humor and great acting

Nothing to say, just sad.

It was only DC show in existence i never stopped watching along with Lucifer. It became actually good after S2 dumping on story and plot (which was awful since beginning and generally majority of DC comics are awfull storywise), getting rid of all awfull characters like Rip hunter, Hawks, Stein, Jax, Ray. Only guilty pleasure to have a fun and laught. So byd bye DC. You couldn’t even give us wrap up for this show and you still frenew The Flush. You even ended Lucifer, the best show from dc. Now i know why this is downfall of entire DC.… Read more »

Not surprised, but I’m mostly annoyed it doesn’t get a satisfactory send off and closure like Arrow and Supergirl…… not right.

This was a fun show to watch. Nothing too serious, just fun. I will miss it. 🙁

It is so very clear all that the BIG WIGGS THAT OWN THE CW want is THE FLASH sadly any show that is better than THE FLASH is dropped thus goes another AWESOME show ???? DROP HE NFLASH and bring back all the good shows you dropped !!!!!!!!

Loved the first season but stopped watching midway through second season. It lost something to me after the British Captain left.
Constantine stand alone show part deux?

I just feel bad for the wonderful cast having to work around some simply terrible scripts the past few seasons. You do have to admire Dominic Purcell for leaving a leaking ship. Bring it back ONLY after new scriptwriters have been hired.

I think they’re making a mistake.
Here’s a petition to sign in on.
https://www.change.org/p/save-legends-of-tomorrow

The FLash, Arrow are best nothing compare others shows so glad got cancelled awful superhero drama. Only those two shows should been it. 4 spin-off annoying new character keep add new. Tired of it run of idea ridiculous.

WTF why cancel such a brilliant show especially when it’s season 7 endscene introduced Booster Gold which would have been extremely fun and cool, I’m just guessing but I think it was a decision taken that took into account of how much diversity there was with both cast and crew some racist big shot didn’t like it and that’s that. I really hope another network picks up the show for a proper final session , so come on you f***s grow a pair and pick up the show

The Arrowverse is over, and the ratings have reflected it for a couple years. CW is basically needing to start all over with their programming.

And again, another fantastic show cancelled without notice so the series could be finished. Ugh, and the networks wonder why no one is watching….

I warned y’all this show would never last without my good friend John Constantine. Maybe you should start listening to the Devil?