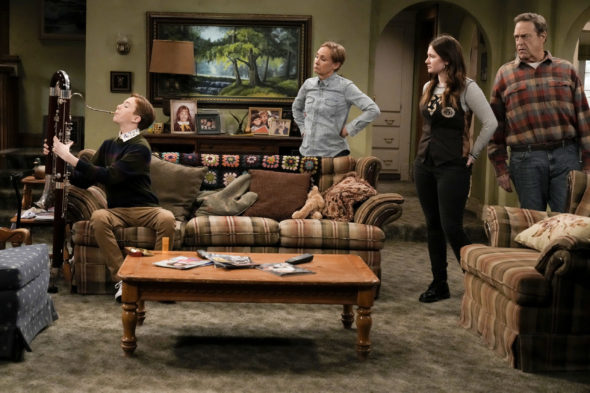 While the show hasn’t been officially renewed by ABC yet, it looks like The Conners is returning for a fifth season. Deadline has reported that the main members of the cast – John Goodman, Laurie Metcalf, Sara Gilbert, and Lecy Goranson – have all reached agreements for next season. Final details, including an episode count, are still being worked out. The most recent seasons have had 20 installments each.

Also starring, Michael Fishman, Emma Kenney, Ames McNamara, Jayden Rey, and Jay R. Ferguson, the series began as a spin-off of Roseanne. The ABC series continues to be one of the network’s top-performing comedies and ranks fifth among all of ABC’s current scripted shows.

What do you think? Do you want to watch a fifth season of The Conners on ABC?

Love The Conners. Hope it comes back in the fall.

Renew The Connors!! In fact, renew for 10 more seasons!

Well, could you bring Roseanne back.. it would be better…..come on, you brought Dan back.. Roseanne has paid for her time… all the things people do in life & Roseanne gets the axe. 🙁 Pretty sad 🙁 More laughter when Roseanne was in it. My fav of her was when Jackie & her were in the bathroom with the pot! LMAO was the best & funniest show ever, I still watch the episode in my collection of Roseanne dvd’s.

I don’t watch , no opinion. I never really cared for it years ago !

Hoping the Conners get another season – my favorite TV show

This is the worst show on TV!

Because conservatives love Rosanne. I live near Roseanne here on the Big Island and believe she is mentally ill.