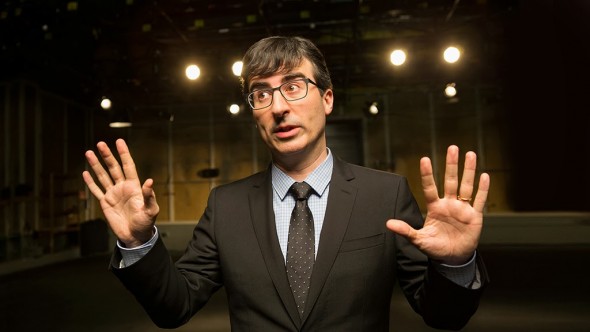 HBO has renewed Last Week Tonight with John Oliver for two more seasons. The Sunday night comedy-news show will be back for seasons three (2016) and four (2017) and will have 35 episodes apiece. The second season began airing on February 8th.

LOS ANGELES, Feb. 17, 2015 – HBO has renewed LAST WEEK TONIGHT WITH JOHN OLIVER for its third and fourth seasons, it was announced today by Michael Lombardo, president, HBO Programming. Consisting of 35 shows apiece, season three will run on HBO in 2016, to be followed by season four in 2017.

“We are incredibly proud to have John as part of the HBO family,” said Lombardo. “His unique ability to deliver socially significant commentary week after week, along with his innate comedic brilliance, puts John in a class by himself.”

The show is the only weekly news-oriented comedy series to be presented on Sunday night. Taped in New York a few hours before it debuts on HBO, the show features a mix of Oliver’s topical commentary on the previous week’s events, pre-taped pieces and occasional guests.

In the first season, which concluded last November, Oliver covered a wide range of topics, from net neutrality and Uganda’s anti-LGBT laws, to Miss America, climate change and civil forfeiture abuse by the police.

LAST WEEK TONIGHT WITH JOHN OLIVER has just received a Writers Guild Award in the category of Comedy/Variety (Including Talk) – Series.

Hailing LAST WEEK TONIGHT WITH JOHN OLIVER as “2014’s best show,” the Huffington Post called it “one of the defining conversation starters in both popular culture and news media,” praising “a winning star, astute tactics and a self-awareness that’s remarkably on point.” In addition, it was named to “best of” lists for the year by the AP, the Los Angeles Times, the Hollywood Reporter, TIME, Vanity Fair, the Boston Globe, the Detroit News, Rolling Stone and the San Francisco Chronicle, among many others. Videos featuring content from the show, as well as original material designed exclusively for the web, have been viewed by millions of people.

What do you think? Do you like this HBO series? Do you make a point to watch it each week?