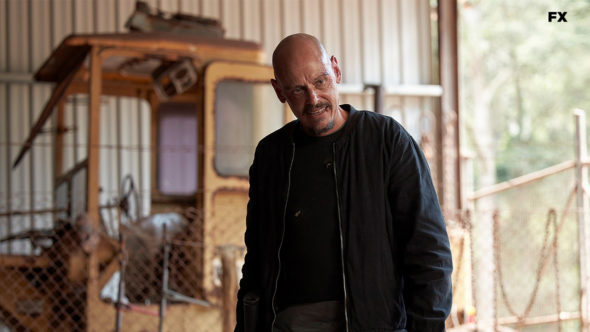 Will Ray’s story end with a bang? Has the Mr Inbetween TV show been cancelled or renewed for a fourth season on FX? The television vulture is watching all the latest cancellation and renewal news, so this page is the place to track the status of Mr Inbetween, season four. Bookmark it, or subscribe for the latest updates. Remember, the television vulture is watching your shows. Are you?

Airing on the FX cable channel in the United States, Mr Inbetween was created by its star, Scott Ryan, and comes from Australia. The series also stars Kenny Graham, Chika Yasumura, Justin Rosniak, Matt Nable, Damon Herriman, Jeremy Sims, and Emily Barclay. In the series, Ray Shoesmith (Ryan) has many roles — as a father, an ex-husband, a boyfriend, caretaker to a sick brother, and a best friend. His life is further complicated because Ray also happens to be a criminal-for-hire. In season three, Ray’s world has contracted. Family life looks a little different as he quietly mourns the loss of Bruce, while figuring out how to care for his aging father, Bill (Graham). As Brittany (Yasumura) grows into a young woman, she draws further away from Ray and comes closer to discovering the truth about who he really is. Things seem good with Gary (Rosniak) and Dave (Nable), however, since severing ties with former boss and confidant Freddy (Herriman), Ray is working freelance and feeling a sense of isolation. With business booming, a new connection with criminal kingpin Rafael (Sims) intensifies Ray’s struggle and when sparks fly with new colleague Zoe (Barclay), an unexpected tragedy makes Ray question both his career trajectory and his ethics.

The third season of Mr Inbetween averaged a 0.09 rating in the 18-49 demographic and 334,000 viewers in the live+same day ratings (includes all DVR playback through 3:00 AM). Compared to season two, that’s down by 24% in the demo and down by 18% in viewership. Find out how Mr Inbetween stacks up against other FX TV shows.

We don’t have to wonder if FX will cancel or renew Mr Inbetween this time around. It’s already been announced that season three is the end. Could the series be revived someday? Subscribe for free alerts on Mr Inbetween cancellation or renewal news.

What do you think? Were you hoping that the Mr Inbetween TV show would be renewed for a fourth season? Are you sorry that this FX show ends with season three?

What a great show !! Binge watch it and I was blown away!! And now it stops are you f@cking kidding me!! Very disappointed!!!! Hopefully someone makes a movie or AMC picks it back up.

My hole family is very disappointed that Mr inbetween has ended after only 3 seasons. What’s going on with fx, Don’t they realise that they have a great program and that they are just chucking it away.?

Quality show easy to watch great acting but like all good shows it gets cancelled. They only renew safe shows.

OMG…!! Mr Inbertween was FRIGGEN fantastic loved every moment every minute of every series and as for Ryan Scott…. he plays the part so incredibly well love him what a talented and sexy man. PLEASE PLEASE
make a series 4. I no so many people who watch Mr Inbertween and friggen love it. I so hope and pray Scott, will do a series 4.

This program, was the best show on FX, too bad the powers to be couldn’t give a green light for a season 4. It has a lot of potential to have more seasons. But, what do I know…

One of the best shows to come out in years! Makes sense that the suits wouldn’t recognize quality! Hollywood has become one boring remake after another?! Hope another network revives this show with all the original cast!

I love the show, wish it wouldnt cancel,

So very disappointed that Mr. Inbetween is not being renewed for a 4th season. It is definitely the most intense show on tv today! I can not believe ratings are so low.
FX, please renew this awsome show, give Ray one more chance!!

I’m truly disappointed that the show was canceled. I was so excited when season 3 started. They definitely need to expand on the character of Ray. Everybody has grown to love him, even killers are human. Bring him back. Debbie from Utah

I absolutely Love this show. I have grown accustom to the characters and I even have a special admiration for Ray, the main character. It’s really ashame this show is coming to an end. It really could have gone much further. It would have been interesting to see the blossoming of a new relationship between Ray and Zoe. This show needs more seasons. I’m disappointed that it’s ending……….sad even.

Great show! What a disappointment it won’t come back. I was so happy when season 3 started. I think it deserves a 4th season. No question about it. There is no show like it. BRING MR. INBETWEEN BACK!!!!!

I love this show! So disappointed there will not be a season 4!

My partner and I love this show. I introduced it to a few of my friends and they also really enjoy it. Disappointed to learn that it won’t be returning for a 4th season. Hopefully Hulu or Amazon can pick it up!

I love this show. I think the only reason ratings are down is due to the long time between season 2 and 3 because of covid. All shows on every channel are taking a hit because of the long hiatuses. FX should give it a chance and bring season 4 out as soon as possible and then run a marathon right before premiering but alas it doesn’t sound like that will happen.

Maybe Amazon or Netflix will pick it up. Let’s hope.