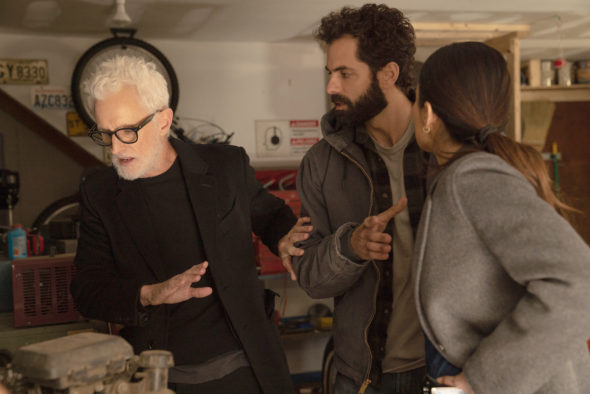 The first season of neXt averaged a 0.25 rating in the 18-49 demographic and 1.17 million viewers. Find out how neXt stacks up against other FOX TV shows.

What do you think? Were you hoping that the neXt TV show would be renewed for a second season? Are you sorry that FOX cancelled this TV series, instead?

Why would they cancel such a successful series. Please think again.

I absolutely LOVED this show. Never knew why it was canceled. So sorry. I really REALLY hope it will be continued!!!

Please don’t cancel. It was so suspenseful.
Loved it.

next was a great program. Should be reestablished. Had a 24 feel.

People I wouldn’t blame fox. If you really think they had the show cancelled think again. What if the government didn’t want it released. Not so much sci fi . To much truth I believe just my thoughts. Anybody thinking the same,!!!!!!!??

This was my thoughts also. Too much “eye opening” and maybe it wasn’t liked by governments.

I am a little upset about the cancellation of NEXT. I loved the show. If I knew it was going to be cancelled I wouldn’t have wasted my time watching it.

This is a Great show!! I recently discovered it on the Fox app on our Roku. I just wish it wasn’t cancelled!!!

Next should be renewed. It will pick up viewership. It’s Syfi and it takes a season before people get it.

Best show this season. Would love to see a second season of NEXT. Can’t believe we initially missed it when it was first released. So glad to have found it after the fact.

They finally come out with a unique show that is showing our future as a reality so they can it so nobody realizes AI is not a good thing.” Its entertaining.must stop that “

Just like Person of Interest (which I also liked) was eventually canceled, Next — showcasing AI — may be hitting too close to home.

I. Really enjoyed Next and hope it will come back, great story!

We are VERY disappointed that NEXT was cancelled. Great show with a good storyline. And yet other trashy shows continue. Just can’t quite figure it out. Really wish FOX would renew this show for another season. Disappointed in you FOX.

Next has to continue to at least finish the season 1 cliff hanger. If fox doesn’t pick it up i hope someone does

Oh no! This was a great show and I love John Slattery! I really hope someone picks it up.