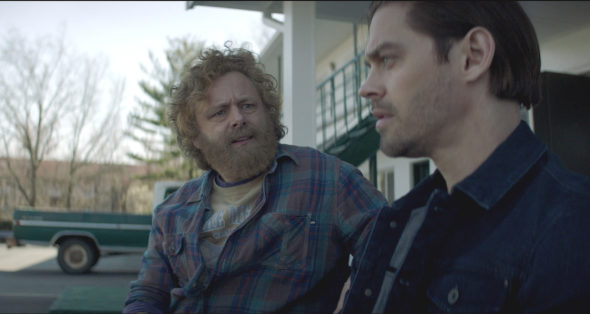 Prodigal Son was cancelled and has now ended its run on FOX. However, there is still hope for the series. WBTV is currently shopping the dark drama to other outlets, so a renewal is still possible. Series creators Chris Fedak and Sam Sklaver have spoken about their plans for a potential third season.

Sklaver said the following about season three plans for the former FOX series, per Deadline:

The spine of the season was Bright becoming his own man. The Dani-Bright relationship was key, along with a new ‘venue’ where Martin could shine.

Viewers would see more of Martin (Michael Sheen) — alive or via flashbacks — and possibly Vivian (Catherine Zeta-Jones) if it is picked up by another home. “We hadn’t pitched Catherine our plan for season three, but yes…” Sklaver said. “We have a totally sane and not at all crazy story for her in season three.”

What we realized this season was how fantastic a cast we have and that we could have a lot of fun with our cases, but we could also truly explore the psychology in the home lives and the personal lives of all of these characters. In considering a season three, it was really a chance to build out those characters in their lives even more. That would take us into the Dani-Bright relationship and each one of our people and really let the show evolve into this kind of crazy, procedural thriller soap opera that we’ve been kind of inventing on the fly.

Fedak isn’t sure what the “chances are” for Prodigal Son to be picked up, but he said that “writing for these actors and this crew was a great privilege. I hope we get to work together again.”

What do you think? Would you watch more of Prodigal Son if it is picked up somewhere else?

Typical of FOX to give us a great show only to pull the plug on it way too soon. It’s what to expect from them. I’m always hesitant to start a show on their network because of that and in that they don’t disappoint. Here’s hoping Prodigal Son gets taken by a network that will understand and appreciate it’s worth.

This is one of the best drama series I have ever watched. It was the only looking forward to the next episode on TV. If you don’t realize it maybe you shouldn’t have the show. It’s more Amazon anyways. I pray someone picks up the series. FOX you have become a true let down.

It’s one of the best shows on TV for sure. Please give in more seasons.

Definitely watch if on broadcast TV. I don’t do cable

Cable is almost dead. If you have a smart TV there is lots to watch for free. If you have an Amazon firestick or a Ruku there’s even a lot more to watch. You do have to have WiFi though.

I love this show! I looked forward to it every week.

I have watched every episode and would continue to do so if shown on a channel that I get on my Spectrum cable service, as it has been in the past.

Please keep this show! Love it!

This year I only watched one show religiously, Prodigal Son. I found it creative and thought provoking. Good acting as well. I was heartbroken to see it discontinued. I would definitely watch if another channel picked it up.

Absolutely 100%!! I Love This Show! Hopefully it will be on a network that is free programming, as I can’t afford to pay for a paid programming network! I am retired and on a fixed income.

Definitely would watch another season, don’t care what channel it is on.

please, someone, pick up Prodical Son .I love watching, bet show around, Fox is just stupid

Would love a season 3

The actors are amazing and deserve to have a real ending with their characters. What was Fox thinking?