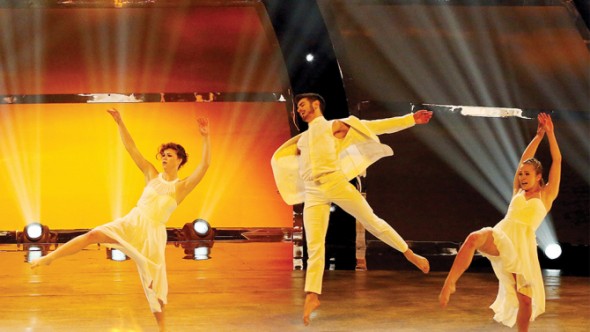 FOX has announced that they’ve renewed So You Think You Can Dance for a 13th season but there will be some changes. For the first time, dancers between the ages of 8-13 will be eligible to compete. Contestants will be paired with dancing all-stars.

Cat Deeley will return as host and Nigel Lythgoe, Paula Abdul, and Jason Derulo will be back as judges.

“SO YOU THINK YOU CAN DANCE: THE NEXT GENERATION” RETURNS FOR 13TH SEASON PREMIERING MONDAY, MAY 30, ON FOX

AMERICA’S BEST YOUNG DANCERS WILL BE PAIRED WITH ALL-STARS

FOX has renewed the Emmy Award-winning SO YOU THINK YOU CAN DANCE (SYTYCD) for a 13th season that will feature a younger generation of dancers. This season, dancers between the ages of 8-13, who are skilled in various dance styles, such as contemporary, tap, hip-hop, ballroom, animation or breaking, will be paired up with All-Stars to compete for the title of America’s Favorite Dancer. Premiering Monday, May 30 (8:00-9:00 PM ET/PT) on FOX, the new season of SO YOU THINK YOU CAN DANCE: THE NEXT GENERATION will feature returning host Cat Deeley and returning judges Nigel Lythgoe, Paula Abdul and Jason Derulo.

During nationwide auditions, which begin next month in three cities, including Los Angeles (Saturday, Feb. 27), Chicago (Friday, March 11) and New York (Friday, March 18), the most talented next generation of dancers will compete in front of the judges for a place at “The Academy,” where only the best of the best will be selected for the next round of competition. At the end of the round, the Top 10 dancers will be partnered permanently with a SYTYCD All-Star. The competition then moves on to the SYTYCD studio, where the top youngsters will compete each week in a variety of styles, working and performing alongside their All-Stars with world-renowned choreographers. One young contestant will go home each week until a winner is named on the season finale.

This season, SO YOU THINK YOU CAN DANCE: THE NEXT GENERATION has an online registration audition option which begins today and ends Tuesday, March 1. All potential contestants are encouraged to have their parent or guardian sign up at the online audition portal at sytycdauditions.com and upload a video or provide a link to a video of the contestant’s performance. If selected, producers will reach out to schedule the contestant for a pre-arranged time slot in one of the three audition cities. Visit sytycdauditions.com for terms and conditions.

“We are so happy to bring back the award-winning SO YOU THINK YOU CAN DANCE for a 13th season this summer with a brand-new format,” said David Madden, President, Entertainment, Fox Broadcasting Company. “The series has captivated its loyal fan base for over a decade, inspiring young dancers across the country and transforming the face of dance in every medium – and we’re so excited to feature a young and talented new group of performers on the series.”

“Through the Dizzy Feet Foundation, I’ve had the great privilege of working with incredible young talent who will eventually shape the future of dance in this country,” said co-creator and executive producer Nigel Lythgoe. “By evolving the SO YOU THINK YOU CAN DANCE format this season, we can showcase the very best junior dancers out there and open up the world of dance to a whole new generation.”

Young contenders will have a shot at showing the judges they have what it takes to be America’s Favorite Dancer, when auditions start on Saturday, Feb. 27 at the Orpheum Theatre in Los Angeles, CA. Please check fox.com/dance for official rules and additional details.

Auditioners traveling to cities for the open calls should make arrangements to stay for at least two days following their initial auditions in the event of a callback.

Dancers either must be U.S. citizens, legal permanent residents of the U.S. or possess current legal Employment Authorization Cards enabling them to seek employment freely in the U.S. (i.e., without restrictions as to employer) by the date specified in the eligibility rules. Dancers must be 8-13 years old to audition. Dancers must be no younger than 9 as of April 1, 2016 or older than 13 years of age on the first day they register for auditions. Dancers must also have a parent and/or legal guardian accompany them to the audition and any callbacks and sign all required documents. Dancers must provide legal, valid proof of age when they register for auditions. Continue to check fox.com/dance for full eligibility rules and audition and show terms and conditions.

Over the course of its 12 seasons, SO YOU THINK YOU CAN DANCE has received 52 Emmy Award nominations and garnered 14 Emmy Award wins, including Outstanding Choreography for Travis Wall (2015); Mia Michaels (2011, 2010 and 2007); Napoleon and Tabitha Dumo (2014 and 2011); Tyce Diorio (2009); and Wade Robson (2008 and 2007). The hit series also received awards in the category of Outstanding Costumes in 2014, 2010 and 2009, as well as awards in Outstanding Lighting Design in 2011 and 2012. In 2015, SO YOU THINK YOU CAN DANCE celebrated seven Emmy Award nominations, including repeat nods in the categories of Outstanding Reality – Competition Series and Outstanding Host for Reality or Reality -Competition Program (Deeley). The series won a TEEN CHOICE Award in 2006 and a Television Critics Association Award in 2012 for Outstanding Achievement in Reality Programming; a Critics’ Choice Television Award in 2012 for the category of Best Reality Series – Competition; and Deeley won the Critics’ Choice Television Award for Best Reality Show Host in 2015 and 2012.

In September, Gaby Diaz was named the Season 12 winner during the live two-hour season finale. Miami native Diaz, 19, received the most votes and danced off with the cash prize of $250,000, the cover of Dance Spirit magazine and the chance to dance with Jennifer Lopez at her residency at The AXIS at Planet Hollywood Las Vegas Resort & Casino. Diaz also joined the rest of the Top 10 for the SO YOU THINK YOU CAN DANCE Season 12 Live Tour, which ended its run Thursday, Jan. 28 at the Théatre St-Denis in Montreal, Quebec.

Visit the official SO YOU THINK YOU CAN DANCE site at fox.com/dance to view exclusive videos and photos. “Like” SO YOU THINK YOU CAN DANCE on Facebook at facebook.com/SoYouThinkYouCanDance. Follow the series on Twitter @DANCEonFOX and join the discussion using #sytycd. Follow host Cat Deeley at @catdeeley, and follow the judges Nigel Lythgoe @dizzyfeet, Paula Abdul @PaulaAbdul and Jason Derulo @JasonDerulo.

What do you think? Do you like this FOX series? Will you be watching next season?

I miss the early seasons format! Please stop changing things and making the show worse! Cat is the only good thing about the show. She is always amazing and funny and works hard! Jason, keep ‘singing’ and leave the show please. Paula, love you, but I miss Mary!
Maybe a ‘next generation’ show would be good for a spin off type season but I would still like to see a ‘normal’ competition season format.

NO, say it ain’t so! Paula & Jason? Ugh! NO, they DID NOT LISTEN to their fans. And including kids into the mix will be ridiculous. This WAS a great show a few yrs back, but not anymore. I can’t believe the sponsors are still willing to spend their money on this program…

Did they listen to their fans at all? I for one will absolutely not watch this season for the first time ever…just off of the fact they are keeping the same judges. Im sure I wont be the only one dropping off from their already very low rated show. Dang!