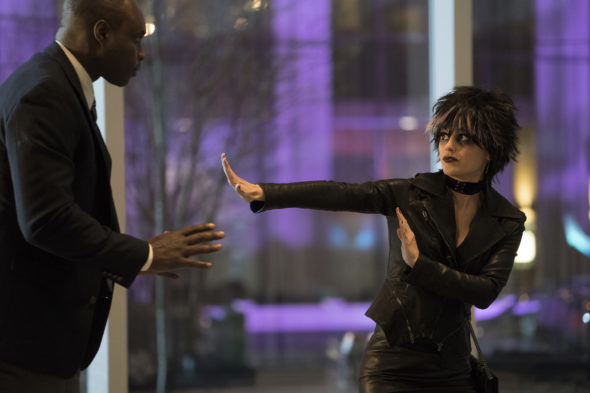 Will Sam and Eddie get a second chance? Has the Take Two TV show been cancelled or renewed for a second season on ABC? The television vulture is watching all the latest cancellation and renewal news, so this page is the place to track the status of Take Two, season two. Bookmark it, or subscribe for the latest updates. Remember, the television vulture is watching your shows. Are you?

The first season of Take Two averaged a 0.42 rating in the 18-49 demographic and 2.71 million viewers. Find out how Take Two stacks up against other ABC TV shows.

Will ABC cancel or renew Take Two for season two? The ratings are terrible so, unless this show is very cheap for the network, I’m sure that Take Two will be cancelled. The ratings are just too low, even for a summer series. I’ll keep an eye on the ratings and update this page with breaking developments. Subscribe for free alerts on Take Two cancellation or renewal news.

*1/21/18 update: ABC has cancelled Take Two but the series could still get a second season. Details here.

What do you think? Were you hoping that the Take Two TV show would be renewed for season two? Are you sorry that ABC cancelled this TV series, instead?

Great show and fun entertainment. We love the entire cast.

Please do not cancel Take Two. It is a fun show and easy entertainment. The entire cast are great. We enjoy watching the show. Not a gory murder show or hospital show. Renew

Love this show. Please renew for a second season! Fun to watch! Look forward to watching every week!!!

This 19-49 garbage is just that. What about the millions of us old f%^ts that watch tv? We are of no matter?

Well, I’m 84 and I love this show. You must be into blood, sex and reality!

Please please renew Take Two!! It’s been a great watch and I look forward to it every week! They’re great characters and I love the story lines. Glad to see them both back in action!! RENEW RENEW RENEW!!!

Please renew Take Two—what a cute couple and fun show!! I am down to so few shows to watch!! So much garbage on TV not worth watching!!

My sister and I LOVE this show! The stories are good…it’s loads of fun and keeps you guessing. I think “Sam” and “Eddie” have great chemistry too. I REALLY hope ABC will not cancel this show. They’ve already cancelled several new shows that I liked. These silly networks don’t give new shows much of a chance to find their audience or build a fan base. It seems like if they are not a big hit immediately then BOOM…they’re out! I’ve been so disgusted by this that I’m about ready to stop investing my time in new shows because most of… Read more »

I love this show. I hope ABC renews it!

I hope this show is renewed. Take Two is a lighthearted crime dramedy and I enjoy watching the mystery unfold.

I hope there is a season 2 I really like take two. Great actors and they work good together

Hope it will be renewed…

Umm I hope this show is cancelled. The worst acting and storylines. I cant even believe it was allowed on air. How dumb do these directors and producers think we are? Embarrassing!

To each his own. If you’re into stupid reality shows, you certainly won’t like Take Two. Or maybe you prefer blood & sex! Perhaps you should stick to Grey’s Anatomy!

I definitely would like Take Two renewed! It is a light hearted crime drama that is like reading a cozy mystery. It is a refreshing break from endless negative news stories and the never ending reality shows

Yes! Please renew this series. As mentioned, compared to more of the moronic reality and game shows, this one is refreshing. Good chemistry between two principals that will, I believe, get even better if given a chance!

Please Renew!!!! Love it. Light hearted and funny. Can only get even better.