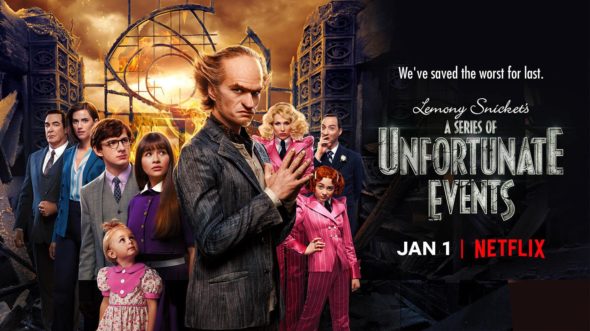 A Netflix dark comedy based on the Lemony Snicket books, A Series of Unfortunate Events stars Neil Patrick Harris, Patrick Warburton, Malina Weissman, Louis Hynes, K. Todd Freeman, and Presley Smith. The story centers on the tragic tale of the Baudelaire orphans. It follows Violet (Weissman), Klaus (Hynes), and Sunny (Smith) and their interactions with the devious Count Olaf (Harris), whose shenanigans know no low, in his quest to take their inheritance. After seeing through Olaf’s disguises and foiling his schemes, the siblings are poised to discover the truth about their parents’ mysterious death, plumb the depths of a covert organization, and uncover the secrets of the coveted, missing sugar bowl.

I don’t get Netflix anyway, only Hulu and Acorn. I’d rather watch “Doc Martin” than the series mentioned on Netflix or old DVD”s of the original “Star Trek” than “Discovery” ( no CBSAll Access either). Only have so much money for a few tv channels and Roku.