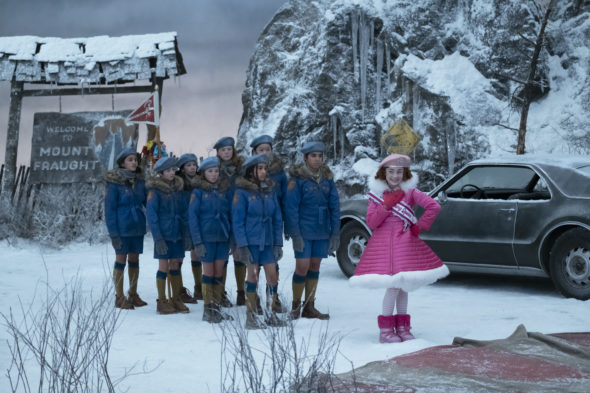 Is all lost for the Baudelaire orphans? Has A Series of Unfortunate Events TV show been cancelled or renewed for a fourth season on Netflix? The television vulture is watching all the latest TV cancellation and renewal news, so this page is the place to track the status of A Series of Unfortunate Events, season four. Bookmark it, or subscribe for the latest updates. Remember, the television vulture is watching your shows. Are you?

A Netflix dark comedy based on the Lemony Snicket books series, A Series of Unfortunate Events stars Neil Patrick Harris, Patrick Warburton, Malina Weissman, Louis Hynes, K. Todd Freeman, and Presley Smith. The story centers on the tragic tale of the Baudelaire orphans. It follows Violet (Weissman), Klaus (Hynes), and Sunny (Smith) and their interactions with the devious Count Olaf (Harris), whose shenanigans know no low, in his quest to take their inheritance. After seeing through Olaf’s disguises and foiling his schemes, the siblings are poised to discover the truth about their parents’ mysterious death, plumb the depths of a covert organization, and uncover the secrets of the coveted, missing sugar bowl.

We don’t have to spend our time wondering whether Netflix will cancel or renew A Series of Unfortunate Events for season four. Before this installment premiered, Netflix confirmed it was the third and final season. Still, I’ll keep an eye on the trades and update this page with any breaking developments. Subscribe for future news alerts on A Series of Unfortunate Events

What do you think? Is the third season the right time to end A Series of Unfortunate Events TV series? Should it have gone longer, or is this the appropriate length for this Netflix TV show?

This is garbage. The entire story was left wide open with so many loose ends that my head is spinning.
Not at all thrilled, and will be telling everyone to not bother if they haven’t already watched it.
Wish I had been warned not to waste my time.
Too bad it left such a bad taste in my mouth, I throughly enjoyed it until the ending explained NOTHING.