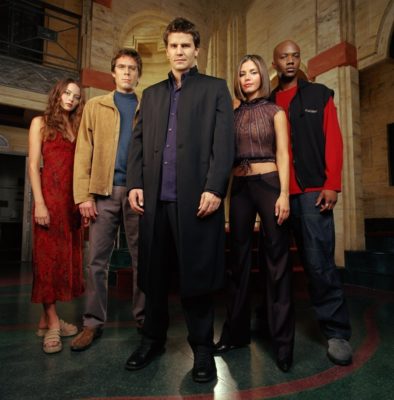 Are you a fan of Angel? Star David Boreanaz recently spoke with The Wrap about the WB TV show’s series finale.

A spin-off of Buffy, the supernatural drama follows the brooding vampire with a soul, Angel (David Boreanaz), after he moves from Sunnydale to Los Angeles and founds Angel Investigations. The series ran on The WB for five seasons before ending in 2004.

In honor of the 15th anniversary of Angel‘s series finale, Boreanaz sat down with The Wrap to reflect on the episode. During the interview, Boreanaz revealed he thinks the WB series ended “great”:

I’ve always thought it ended great.I mean, even when it was written and we shot it, I had no problems with it. I think that’s great. I mean, I think that that’s a world that had opened up to a lot of people — the way our show, the way ‘Angel’ ended was I think right. You kind of go out continuously fighting, you know? And I think that the message of the show was always about the fight and that was a special moment.”

And what did happen to Angel and the crew? Boreanaz says:

What do you think? Have you seen Angel? Were you satisfied with the finale?

Angel: After The Fall (Season 6) was a 2007 comic book series that dealt with what came after that finale and was co-plotted by Whedon. In my opinion it is worth reading.