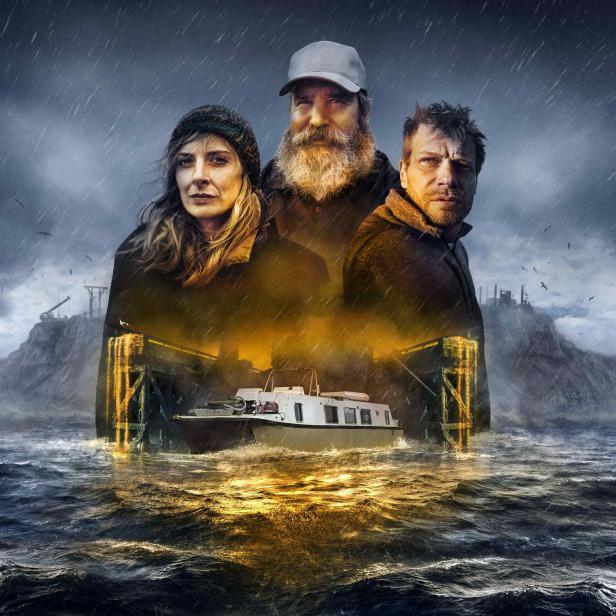 Bering Sea Gold is returning for its 10th season later this month on Discovery, and that means the series is getting ready to celebrate its 10th year on the air. The new season will feature a shake-up in Nome, Alaska.

“Nome, Alaska has been stirring up a summer mining season no one can pass up. This season, gold prices are on track to reach an all-time high and with this new opportunity comes new challenges. Owning a claim is more vital now than ever as it’s the only way to guarantee a place to mine. Nome’s untamed roots are reestablished as the mining fleet among the competition and returning familiar faces battle in a free-for-all to claim the richest grounds on the Bering Sea. Find out who’s staking their claim in an all-new season of BERING SEA GOLD premiering on Friday, April 30 at 9pm ET/PT on Discovery and streaming on discovery+.

With the biggest shakeup Nome has seen in over 100 years, seasoned miners and average joes alike are on the hunt for the biggest money-making claims. Shawn Pomrenke, former “Mr. Gold,” returns with a new ally in mind — rival Dave Young of Arctic Sea Mining. Shawn’s plan? To mine the most gold ever in a single season while reconstructing the Myrtle Irene to launch on the infamous and most sought-after Tomcod claim. With even higher hopes to take over his family’s inland mine and buy out his dad Steve Pomrenke, Shawn is willing to risk it all–for a second time, in the hopes of achieving the most profitable pay streak he’s ever had.

Captain Kris Kelly has his own eyes on the prize, and surprisingly, a new mining ground. He’s taking the most ambitious chance of his mining career by leading the largest vessel he’s ever captained, where no miner has ventured before, in order to live and work off of the coast of the remote town of Elim. It’s Kris’ most unpredictable season yet as he lands himself on a new excavator dredge and dodges bullets from every direction while he chases gold…literally. Kris will also share his “exclusive” mining knowledge with viewers in “Kris Kelly’s Secret Guide to Mining” featured in each episode.

But it’s the return of rogue mastermind Zeke Tenhoff and Emily’s mercurial father Steve Riedel that really stirs up the already tumultuous Bering Sea. Zeke focuses on creating what he thinks will be a competitive advantage — a first-of-its-kind sailboat dredge. This type of dredge will enable him to access further and deeper claims, stay overnight on the dredge, and withstand storms that would otherwise push other dredges back to the harbor. The mad scientist doesn’t return alone; he’s got a rockstar crew with him including brother Sam Tenhoff and his bassist Raven. Zeke may have taken a break from the Bering Sea, but nothing will stop him from pursuing its gold. All the while, Steve Riedel returns ready to start from the ground up to assemble a mining rig and secure a top-notch claim of his own. He’ll do whatever it takes to make it happen. Along the way, Steve Riedel will dig into the history of the remote gold-struck town where he shares with viewers the “Weird Wild Wonderful World of Nome” in nearly every episode.

As the battlefield of Nome continues to grow, Emily Riedel must pivot her strategy and plan for a new idea of success. She puts aside her plans to operate a second dredge and dives into the claim war while recruiting Nome’s top gold divers to establish her elite team. Meanwhile, Vernon Adkison gambles all he’s got for one of the richest claims on the Bering Sea — Claim 56. With his go-to team all unavailable, he must resort to finding a brand-new crew. Desperation leads him to a possible collaboration with Steve Riedel, who Vernon has fought and fired multiple times throughout the years.

The wild west of mining is back with a new gold rush right at home in Nome, Alaska. With the richest claims up for grabs, these miners are willing to risk it all for the ultimate pay off.”

What do you think? Are you a fan of the Bering Sea Gold TV Series on Discovery? Do you plan to watch the new season later this month?

I have a 71 mudcat dredge with a 4 cilender Detroit diesel.

I really wanted to contact the ones on the reaper , to say why not put acouple of bars across the entrance of the suction hose , to prevent sucking up big rocks and blocking it problem solved .

Can’t get enough of this show.

I just love the show! Vernon has come a long way, calming down and now really caring about his crew. His “social hour” is really hilarious at times! Steve Riedel…well I have to admit that I always fast forward when he’s in focus ranting, but Emily, his daughter has really impressed me! Speaking of total opposites! Sean is really going to make his kingdom, it seems, and I totally admire him for what he has achieved! May the show go on for many more seasons to come!

A load of b—ocks
What have you done to this show its now a farce .

Well i have watched every episode ,but this season they are trying to turn it into a comedy show and forgetting about the gold diving so i now record it and forward wind so i dont have to watch the rubbish bits

Adding Steve Riedel and Zeke Tenhoff ( and his crew) to the series, Gold Rush-Bering Sea has destroyed the show. Please fix this problem. They are such a turn off to watch that we have to stop watching the show. Thank you.
Regards,
Maria

Started to watch it.. but OMG Steve Reidel is enough to make any one throw up and I Wont WATCH it anymore…. Also the secrets of gold mining who thought that time waster up.. did they hire an 8 year old to rewrite the show???? BYE BYE – to much juvenile crap for me Arsesole Steve Reidel was the straw that broke the camel’s back…talk about bottom of the barrell… Eeee gads.

Please don’t let that idiot Steve stay. He disgusts me and everyone I know that watches. What happened to the guy (I forgot his name) that was on the myrtle Irene, is he not going to be the captain anymore? I hope they don’t take Shaun for a ride on the deal being made.

Wouldn’t miss it !! The Kelly’s are my favorite people !!!