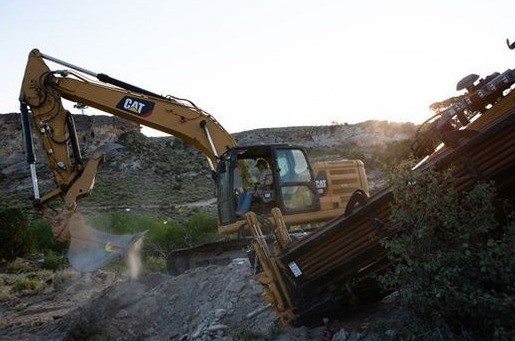 “There are some places on earth where the land just seems different, and Blind Frog Ranch in eastern Utah is one of those places. Locals say the land is cursed. That it’s trying to hold on to something. From Aztec treasure to caverns of gold and silver to lost Mormon mines, legends surround Duane Ollinger’s 160-acre ranch in Utah’s Uintah Basin. But Duane isn’t concerned with the lore. After discovering a system of seven underground caves that run through his property, he is singularly focused on finding what’s hidden in them – no matter what the cost. The brand-new series, MYSTERY AT BLIND FROG RANCH premieres Friday, January 1 at 10 PM ET/PT on Discovery Channel. MYSTERY AT BLIND FROG RANCH will also be available on discovery+ starting January 4.

Sitting nearly adjacent to Skinwalker Ranch in Utah – another area notorious for paranormal sightings and other mysterious activity – Blind Frog Ranch has drawn treasure seekers for hundreds of years. And now, Duane Ollinger has sunk everything he has in hunting for what he believes is a vast fortune of gold in the ground. But with each step Duane takes closer to finding the treasure, the land seems to hold on tighter, stopping him in his tracks.

With his money, resources and reputation on the line, Duane is hellbent on finding the truth and uncovering the treasure – no matter the cost. So, this year, he’s going all in and bringing on a team of people to help him: his son, Chad Ollinger, friend and retired Sheriff’s Deputy, Charlie Snider, and Eric Drummond, a renowned geologist who will help him map the faulted land. Duane and his crew will pull out all the stops – and heavy machinery – to find the treasure buried beneath Blind Frog Ranch, even if the land fights them every step of the way.

In addition to watching the series on Discovery, viewers can check out new episodes each week and the first episode of MYSTERY AT BLIND FROG RANCH on the Discovery GO app. Viewers can join the conversation on social media by using the hashtag #BlindFrogRanch and follow Discovery on Facebook, Instagram, and Twitter for the latest updates.

What do you think? Do you plan to check out Mystery At Blind Frog Ranch on Discovery?

We want to see it, and look for it every night! What is the problem now, that this program is not shown? PLEASE pursue the mystery!!!!

Would love to see continuation of more exploration of the Skinwalker Ranch. Please??

I started watching , but it wasnt long before I was screaming at the screen ” buy a trash pump ” why they chose to dive into a pond instead of drain it is beyond me. Then theres the fact that this ranch , like skinwalker , sits in a basin downwind of a bombing test area. The ground becoming metal? Ever heard of radiation?!?. Taking up an hour to cover events that cld be condensed to 10 minutes seems to be the rage, but I think I will watch every third episode as nothing really seems to happen that… Read more »

My thoughts have been that someone or several people are trying to scare you off the property. The deer carcasses are laid there by human hands its not by past curses. I mean it has nothing to do with Indians history because there is none. Local people have tended this far fetched Indian taboo in your head. Dont believe anything that they have told you. And that drone if it wasn’t yours I’d give them something else & not of the their liking. Your property has everything to gain. The other properties are something to watch out. I believe someone… Read more »

Why don’t you dudes get a freaking super pump and drain the water from tunnel and spray it around the property and it will green it up. Common sense pump it out!!!

We’re watching! Fingers crossed for you, Duane and Chad!

I’m looking forward to it, and all of the “Twist’s and Turn’s” that I expect will be taking place from time-to-time. I love the Discovery Channel.

I thought I had a Lotta respect for the discovery channel and their selection of shows. This blind creek ranch with the frogs sounds like a bunch of horse ****. Right from the gecko why didn’t they just pump out the water it was in there when it came up rather than diving and putting little drones. Come on producers do a better job maybe I’ll watch

We plan to watch it.