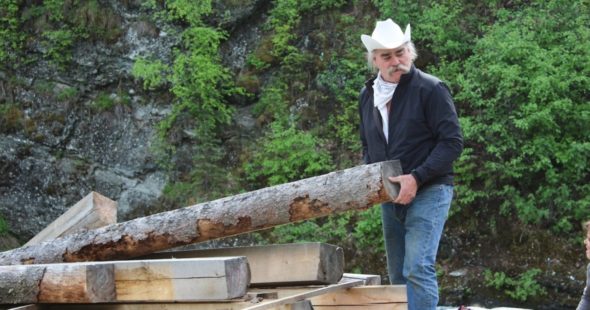 Homestead Rescue: Raney Ranch is coming soon to Discovery. The new series will follow the Raney family as they tackle fixing up their homestead. The series premieres in October.

For years the Raney family has helped novice homesteaders around the country save their homesteads from brink of failure and helped to bring their dreams of living off the grid to life. Now, inspired by years’ worth of rescues, Marty Raney will attempt his greatest recue of all – his very own 40-acre homestead. In an all new series, HOMESTEAD RESCUE: RANEY RANCH, the Raneys take on the most ambitious project the family has ever attempted, to build a multi-generational homestead.

HOMESTEAD RESCUE: RANEY RANCH premieres Tuesday, October 6 at 8pm ET/PT on Discovery. In addition to watching the series on Discovery, viewers can stream each episode by downloading the Discovery GO app. Viewers can join the conversation on social media by using the hashtag #HomesteadRescue and follow Discovery on Facebook, Instagram, and Twitter for the latest updates.

After countless rescues taking them around the country much of the year, the Raneys find themselves overdue for a little saving themselves. Marty has decided to build their dream log cabin on a previously inaccessible part of the land where it will sit 300-feet up on a cliff. The new location will give him access to previously unattainable resources and become the hub to a multi-generational paradise equipped with green house, garden, workshop, and cabins for his kids.

In the season premiere, Marty must get creative to get thousands of pounds of vital gear and materials across a raging river to his property to begin the epic project. He decides to attempt the risky crossing in his work truck which proves much more dangerous than he expected.

With only 6 weeks to complete the project before getting back on the road to rescue others, Marty must put decades of homesteading expertise to the test, as the Raneys must fight the clock, the elements, and the ‘cliffs of insanity’ to complete the new and improved Raney Ranch. Will this be the ultimate master class in homesteading, or has Marty finally met his match?

What do you think? Will you check out Homestead Rescue: Raney Ranch on Discovery Channel when it debuts?

Love the Raneys! Hope they are releasing new episodes, I think we’ve binge watched all the seasons already.

Love this show can’t wait for a new season.

This is an excellent show. Marty is a great showman, but he and his family are also very skilled, caring and watching this brings back mostly good memories of my time off the grid. A good education they are exemplary teachers/amazing workers. Look forward to more, and the Raney Ranch new show in January.

Love the Rainey ranch episodes the best. I love Missy’s Gardens and greenhouse she built for her family. Can’t wait to see all the projects on their own homestead especially finishing the two log homes. Missy should have her own show about her gardens. Not everyone can live off grid but millions of us garden!

I love this show. Can you tell me if it will return with new shows in 2021

I’m all in for more. Love the ideas for building and the greenhouses

Yes I look forward to each episode. I just wish I could go back 40 years. I am 72 and to old to start over but enjoy watching them.