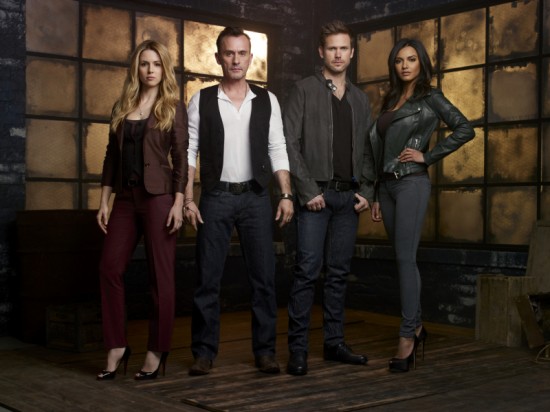 TV show description:
Jeff Sefton (Matt Davis), an investigative journalist, has learned to live with his younger brother Nate’s relentless string of obsessions. Jeff raised Nate since the death of their parents. Nate’s latest rant is that a hit TV show, Cult, intends to harm him. When his brother mysteriously disappears however, Jeff starts to take Nate’s paranoia even more seriously. In the process, he uncovers the dark underworld of the Cult TV show and its rabid fans.

The fictitious version of Cult is centered on the cat-and-mouse game between a charismatic cult leader and the detective who was once a cult member. The TV series has become an obsession for its viewers and some of its devotees now seem to be taking their fixation to deadly extremes in the real world.

In the parallel worlds of the show-within-a-show, the cult’s leader, Billy Grimm, is played by actor Roger Reeves (Robert Knepper). Roger plays Billy as a compelling but ruthless leader, a man whose primary agenda is winning back his former follower and lover, Kelly Collins, played by actress Marti Gerritsen (Alona Tal).

Since escaping from the cult, the Kelly character has become an LAPD detective. When her sister is kidnapped, Kelly finds herself drawn back into an investigation of the group’s activities, and she struggles to keep Billy at a safe distance, knowing he would stop at nothing to get her back.

As the television show grows in popularity, cast members Roger and Marti feel the effects in their “real” lives. Roger isn’t sure who he can trust, and Marti is beginning to realize that being the star of this particular show may have truly dangerous consequences.

The only person who seems willing to help Jeff with his investigation into this double world is Skye Yarrow (Jessica Lucas), a young research assistant for Cult who has also started to grow suspicious of the increasingly dark happenings surrounding the show.

Jeff and Skye are both driven by personal reasons to uncover the mysteries surrounding the show. Jeff is focused on finding his brother Nate while Skye is searching for answers about her father, who went missing 10 years ago and is presumed dead.

All Skye knows is that her father was investigating Steven Rae, the reclusive executive producer/writer who created Cult. In fact, she took the job on the show in order to make contact with Rae and see if he will answer her questions. Jeff and Skye are practically strangers to each other, but they are united by the common goal of finding out what happened to their family members.

It soon becomes clear to Jeff and Skye that the gruesome plot twists on this television show are much more than fantasy for some very unfortunate people. The hardcore fans of Cult would kill to see what happens next.

The Cult production team prepares to film a live scene that will air online after the show’s season finale, but only the actors know how it will end.

Meanwhile, on the inside show, Kelly follows a lead on the whereabouts of her parent’s killer, Henry (guest Frank Cassini) and tracks him to hidden catacombs. There, Billy ambushes Kelly, and taunts her to kill Henry.
First aired: July 12, 2013.

What do you think? Do you like the Cult TV series? Do you think it should have been cancelled or renewed for a second season?

I can’t believe there was only one season!!! I just watched the whole season in one day…uuugghhh I need to know what happened!!!

Where can I watch this show?

Where are you guys watching now? I want to see it.

What on earth were you people thinking by cancelling this show?!?!? I just watched the entire season in one day, I still can’t get enough of it!!! Seriously though, what were the reasons for this show being cancelled? Please please please bring this show back! It will be worth it!!!

Just binge watched Cult all day. Definitely should have been renewed! Great show. I can’t believe I’ve never seen it before.

Where did you watch it?

This is another show you should really bring back. It’s very intense.

Darn good!!! Get us a new season

All my colleagues and friends LOVED it! We all want to see a new season!!!
Let’s join up and get it back on

Unbelievable this was cancelled, I think it was GREAT!! Give us a new season!!

Absolutely LOVED if! Put it back on please!!!!!

Definitely should have got a season 2

i tink should be 2nd season definitly

I cannot believe it was cancelled! I’ve been waiting for the season to start. Disappointing.