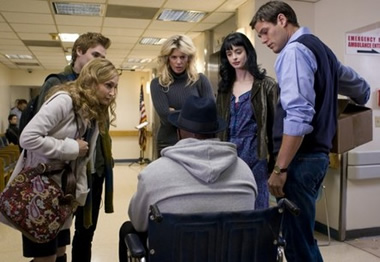 TV show description:
This TV show revolves around a group of suicide survivors that are both comic and tragic in an outpatient program. As they relate with each other, they form unlikely relationships, and try to learn how to get along with each other and themselves with their second shot at life.

Lily Champagne’s (Krysten Ritter) religious beliefs fall in the gray area between atheist and agnostic. Not happy in her life selling cosmetics, Lily originally decided to take her own life. Then she had a vision when she flatlined at the hospital, and it gave her a reason to survive and want to start all over again.

Robert Collingsworth (Ivan Sergei) lost his wife a couple years ago and desperately wants to be with her again, in any capacity. Although he’s a devout Catholic, he attempted suicide. But when it didn’t work out, he inadvertently became a celebrity. He’s still in love with his wife but is drawn to Lily. He’s not sure if he’s really falling in love again, or whether it’s out of a need to feel alive again.

Detective Christian Miller (Eric Shcaeffer) has his own set of rules. He was tasked with investigating Lily’s suicide attempt, well after her release. Christian’s still following up on her and inserts himself into her and Robert’s lives.

The leader of the support group is Dogg McFee (Ving Rhames), ex-major league baseball player. He tried to off himself a long time ago and is in a wheelchair, but now has an intimating strength, physically and in other ways. He plants himself squarely into the lives of the others in the group.

Particularly inspired by the support group is Carla Glick (Robyn Cohen). She’s a housewife who seems to be happy in her life, but starts to fall back into with what troubled her when she tried to kill herself. Lily inspires her to change her ways so that she won’t entertain the dark thoughts again.

Former supermodel Shawna Rollins (Rachel Hunter) tried to take her own life after her agent called and asked her to be on a “Where are They Now” special. She’s now restarted her life with a new career as a life coach, but she can’t put her finger on what it is that she’s still missing. In a similar place is construction worker Jorge Sanchez (James Martinez). His low self-esteem led him to try to kill himself. He works on that self-image while he recreates himself, following his dream to become a standup comic.

Adam Rosenblum (Seth Numrich) is a 17-year-old musician and high school student who doesn’t get along with people his own age. He lives at home with his liberal parents and, in the support group, he finds he’s able to connect with others for the first time.

Series Finale:
Episode 10 — Are We All Just Dead?
At the start, everyone seems happy and paired up. They’ve seemingly discovered what makes them content.

Detective Miller (who we know isn’t actually on the police force) meets with Lily’s father, Mr. Champagne, about the death of his mother and his mysterious trust fund. Mr. Champagne pretends he doesn’t know what Miller is talking about and alludes to his wanting to talk to his lawyer. Miller leaves in a hurry, receiving disturbing news from his doctor.

Lily has the grand opening for her new vintage clothing story, Lily’s Store-y. Her friends attend and a romantic moment with Robert is interrupted by her father. Lily starts to make a heartfelt speech but is interrupted when Carla has an allergic reaction to something that she ate and is rushed to the hospital. Upset, Robert says something inappropriate that upsets Lily.

At the hospital, Miller tells Robert that now’s not the time to speak to Lily, especially after his remark. Before we learn that Carla is okay, Lily tells Robert she never wants to see him again and he leaves. Miller takes Lily home but suggests that she come to his place for homemade cookies. A sucker for baked goods, she takes him up on this offer.

Miller admits that he has stomach cancer and tells her about his mother’s death. He breaks down and cries. He’s very convincing but is he just manipulating her? Lily uses the bathroom and finds a drawer full of fake IDs. She texts Robert where she is and that something is very wrong. Miller comes up behind her and, scared, she backs out of the room.

As she goes downstairs to leave, several thugs enter. One of them is Diego, the man she saw when she died and who she believed was dead. Miller comes downstairs with his gun drawn, Diego demands his money, and Lily is literally stuck in the middle. It turns out that Diego is Miller’s bookie. As Lily tries to leave again, Miller puts the gun on her. Lily questions why he would want to shoot her and he reveals that Lily’s father killed his mother.

Robert arrives at the entry and Lily tries to convince him to leave. She tells him that she doesn’t love him so he’ll go. Moments later, he returns and sees what’s going on. After being called “Suicide Dummy,” Robert charges Diego and we hear a gunshot as the credits roll.
First aired: June 25, 2010.

The series was cancelled due to low ratings.

I thought I’d add a comment for this one since no one else has. This was a fantastic show, it was never going to be a big mainstream on howeve I always felt it was one of those that many missed the boat on. The characters were well developed and interesting and there wa good interaction beween them. There was a bit of a heavy emphasis on the Christian Miller character which I think needed to be toned down. But nonetheless he was an intriguing one. Overall I reckon this show was one most missed out on and although it… Read more »