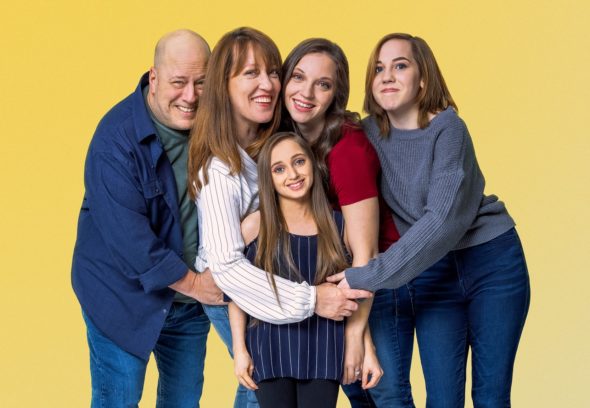 TLC revealed more about their summer premieres in a press release.

“Capping off stellar first seasons, TLC, the #1 primetime cable network with women 25-54 for the third consecutive year to date, announced the renewals of three breakout freshman series: I AM SHAUNA RAE, DAVID & ANNIE: AFTER THE 90 DAYS and LOREN & ALEXEI: AFTER THE 90 DAYS. In their debut seasons earlier this year, all three averaged over a 1.0 P2+, in addition to ranking in the top 5 freshman series for women 18-34 so far this year. These highly rated new series left viewers wanting more and as a leader in family and relationship programming, TLC is delivering exciting sophomore seasons of their journeys.

Along with these renewals, TLC announced summer premiere dates for four returning, fan-favorite series. DR. PIMPLE POPPER pops into the unknown, tackling masses, inflamed lumps and whole-body rashes. Just when Randy Fenoli and the Kleinfeld team think they’ve seen it all, SAY YES TO THE DRESS celebrates its 15th anniversary of making brides’ dreams come true with all-new brides unlike anything they’ve experienced before. MY BIG FAT FABULOUS LIFE follows Whitney and the Thore family as they handle Babs’s recovery following a stroke. 7 LITTLE JOHNSTONS brings major life changes for all the children and one Johnston is moving in with a boyfriend.

Shauna is more determined than ever to live life like every other 22 year old. Standing 3 feet 10 inches tall, her growth was stunted after a childhood battle with brain cancer. This season she continues to struggle with the side effects of her condition and seeks out answers to her mounting medical questions. Shauna is in the driver’s seat (literally!) on her journey for independence as she starts driving lessons. Will she be able to achieve the huge accomplishment of getting her license? Meanwhile, her parents Patty and Mark hunt for a new house that will have a separate living space for Shauna, however, Shauna and her younger sister, Rylee, are making their own plans to move out on their own… despite their parents’ worry. In order for them to live independently, Shauna must first get a job. Of course, that’s easier said than done as some careers may be out of her reach given her child-like stature. The family visits older sister Tara in Florida, and while they’re looking forward to some fun in the sun, they know it may not be long before things get heated between Tara and Shauna. Through all of this, Shauna is still looking for love and explores new ways of dating, including meeting a man who also has pituitary dwarfism. Will sparks fly between these two kindred spirits? I AM SHAUNA RAE is produced by Figure 8 Films for TLC.

David and Annie are returning to Thailand for another attempt to obtain visas for Annie’s brother, Jordan, and cousin, Amber, to attend school in America. This time, David’s daughter Ashley is coming along to finally meet Annie’s family in their village and afterwards, they head to the tourist city of Phuket. The hope is to immerse the kids in English and give them American experiences like BBQ and amusement parks. By the end of their trip, will the kids’ language skills improve enough to ace their visa interview and come to America? DAVID & ANNIE: AFTER THE 90 DAYS is produced by Sharp Entertainment, a part of Sony Pictures Television, for TLC.

Only a few months after giving birth to baby Asher, Loren and Alex are in for another big surprise, they’re pregnant with a third! Now, they only have nine months to find a bigger place to live, kickstart Shai’s child-modeling career, and take their first family vacation to Israel… all while dealing with the madness of life with two kids under two. LOREN & ALEXEI: AFTER THE 90 DAYS is produced by Sharp Entertainment, a part of Sony Pictures Television, for TLC.

Fan-favorite series returning this summer include:

Say Yes to the Dress celebrates 15 years of making brides’ wedding dress dreams come true when the show returns this summer. Just when Randy and the Kleinfeld team think they’ve seen it all, Say Yes celebrates its crystal anniversary with brides unlike any they’ve experienced before – including a bride-to-be who got engaged mere hours before her appointment, as well as a bride who uses her feet instead of her hands. No bridal appointment is complete without a lively entourage, and this season raises the bar on hyper-opinionated mothers, fashion-forward fathers and scene-stealing sisters. Join the conversation using #SYTTD. SAY YES TO THE DRESS is produced by Half Yard Productions, a Red Arrow Studios company, for TLC.

This season DR. PIMPLE POPPER goes where no pops have gone before–into the unknown. Dr. Lee has no fear as she jumps in scalpel-first to tackle head-covering inflamed lumps, stubborn lifelong rashes covering the patient’s entire body, and even a set of huge turtle-shell-textured masses that just MIGHT be the world’s largest-ever genital warts – or something worse. From thousands of extreme, arm-covering xanthomas, to fuzzy-jelly-feeling mystery back bumps, Dr. Lee jumps at every new challenge with a smile and a love for her patients and their skin. For those who have lost all hope for any chance at a normal life – Dr. Pimple Popper is here.Join the conversation using #DrPimplePopper. DR. PIMPLE POPPER is produced by Ping Pong Productions for TLC.

The Thores are devastated after a stroke leaves Babs hospitalized with an uncertain road to recovery. With the help of her supportive friend group, Whitney musters the strength to be the pillar her family needs during their darkest time. Elsewhere, things get tricky for Whitney when she mixes her professional and personal life by hiring her ex-boyfriend, Lennie, to help with her online fitness videos. And love is definitely in the air between Jessica’s wedding around the corner, Buddy’s new engagement and Ashley’s second baby on the way. Will Whitney find a love match for Heather as well? Or will a sexy Caribbean vacation have more in store than Whitney bargained for? Join the conversation using #MyBigFatFabLife. MY BIG FAT FABULOUS LIFE is produced by Pilgrim Media Group, a Lionsgate Company, for TLC.

Big changes are coming for the family. Earlier this year, Jonah moved out on his own. But when he starts experiencing debilitating anxiety, Trent and Amber wonder if he should move back home so they can help him get his life back on track. Meanwhile, Liz and Brice are ready to take their relationship to the next level by moving in together, despite concern from their parents. Anna’s last relationship was over before it even started, but she’s ready to change her status for real this time. Alex and Emma are approaching their 17th birthdays with college and careers on their minds. Join the conversation using #7LittleJohnstons. 7 LITTLE JOHNSTONS is produced by Figure 8 Films for TLC.

What do you think? Are you excited to see the summer lineup of shows on TLC? Which of these programs have you seen?

Its a mystery to me why this channel/network even exists – it seems to serve little purpose besides serving up the biggest load of consolidated crap tv outside of Amazon studios and CBS. I guess it could be worse, it could be MTV or whatever channel is it that keeps bringing the corpose of Judge Judy back on the air year after year after year…