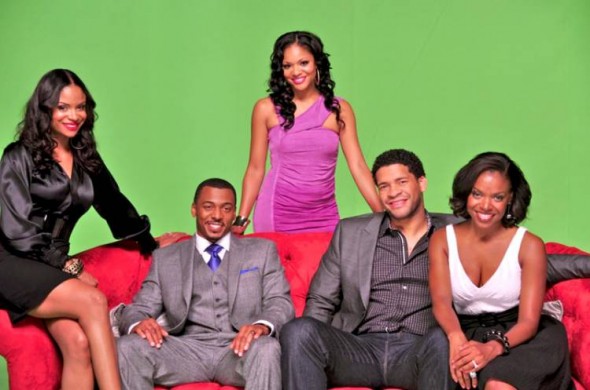 Another TV show cliffhanger has been left unresolved. According to Radio & TV Talk, sitcom Let’s Stay Together has been cancelled after four seasons on BET.

A publicist for the cable channel confirmed that there won’t be a fifth season for the Atlanta-based comedy.

Of the cancellation, co-star RonReaco Lee said, “They finally put it to bed… It left on a cliffhanger. It’s unfortunate the show didn’t get a proper conclusion.” Lee noted that BET has been going through management changes.

What do you think? Are you sorry that Let’s Stay Together has been cancelled and won’t be back for season five?

I would like to start a petition to get this show renewed. This was a great show. It was positive. and I loved the show. I am very disappointed that the show has been canceled. BET please renew the show. PLEASE

I hate that shows featuring positive black roles are cancelled. If “rachettness” was a main subject of this show, Let’s stay together would still be airing. So so sad…….

I was disappointed lst was cancelled. A good clean show with lots of fun. No sexuality
and the cursing was done away with. We need to keep this show going.

I am very disappointed this show was cancelled. All we have on television now are ratchet reality shows. How sad.

Yes I would love to see the show renewed for another season. I thought it was awesome.

I am so very disappointed that this wholesome, creative, humorous, and enjoyable show has been cancelled. I thought Let’s Stay Together was a wonderful show and a BET anchor. The cast was comprised of veteran actors who were excellent and fun to watch. Why is it that the Black Entertainment Network has cancelled an entertaining program that showed Black people in a positive light? BIG mistake!!!

We don’t have to slam others shows to illustrate our frustration with seeing Let’s Stay Together being canceled. All like them all (even the ratchet), but this was one of the more positive ones. I feel it had a talented cast that displayed great skill. It had a good storyline and it was hilarious. It would be awesome to see another network pick up this sitcom. Maybe, someone with the right pull will take the time to read these comments and consider picking up this show. #theresalwayshope

A show that kept me not only laughing… but smiling. A show that I didn’t mind watching with my family and I am very picky about what my family and I watch. A show with everyday black people has gone off the air but the new black (ratchet black) shows are staying on. Can a positive black woman get a black show that is positive to stay on the air. I don’t understand it… here is a show where black women are not calling each other *****, they are not whoring around, they’re not fighting and spatting on anyone and… Read more »

Maybe that’s why the show cancelled.

WOW, I love this show. BET is not interested in good shows; however, put a bunch of negative foolishness on and they love it. This was a positive show with a cast that knows how to “ACT” unlike some other shows. What was most interesting was the writer was able to mix comedy with real life situation. Also, the fact that the actors were never the same, you couldn’t predict each and every outcome.( The Game, the same old stuff, a womanizer, the fool, old woman having a baby still not married, haven’t learned a thing, etc., etc.). Oprah were… Read more »

Let’s Stay together was a great sitcom. I was so excited about season 5. PLEASE reconsider!

BET never gave Let’s Stay Together the right kind of publicity or promotion. Regular BET watchers that I know, haven’t even heard of the show. Or may have seen a few sorry commercials about it, but didn’t pay much attention to them. It wasn’t a great series, but it seemed to have potential for more longevity than just four seasons. I especially liked the actors who played the main couple. Sorry. Don’t know their names.

Let’s Stay Together was a good series. They never given a fair chance.

I’m sorry but Let’s Stay Together was a good series. I enjoyed it very much.

I loved that show its sad to say only interesting and positive black television shows are cancelled!!

Why tell us about BET shows and not some of the other stations?

What are you talking about? You’ve commented many times on this site and they weren’t all on BET show posts.

I’m not that surprised at the cancellation, honestly. However, I am surprised that it lasted as long as it did. I’m sorry, but I just don’t think it’s a funny show.

I don’t know what you are talking about! But that was show was funny and positive.

What are you talking about? Let’s Stay Together was hilarious & positive show.

Oh boy this is not good at al,l Tuesday nights during the Spring from March thru May is usually when Let’s Stay together usually airs along with The Game at 9pm/10pm. I sure hope nothing happens to The Game Tv Series inspite of BET renewing it for season 8.

We all know how networks can change their minds on shows let us all keep our fingers cross BET new exces do not cancell The Game as they just did this show.

Not only that I am sorry but I am pissed. Let’s Stay Together was really a good show. It was way better than The Game. Let’s Stay Together is one fewer shows that is worth watching. They really treated the show very unfairly. It really saddens me that BET would take the time promote The Game which should’ve been put to rest ages ago & The that over the top Buffoonery show Real Husbands Of Hollywood. We finally get a good comedy that put Black people in positive light but BET takes that way from us. BET doesn’t give a… Read more »

maybe another network will pick it up1 like Centric,OWN,or T.V.1