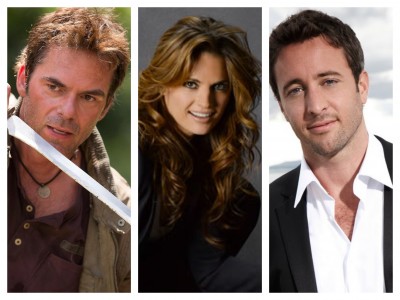 Monday, October 1, 2012 ratings — There weren’t any of series premiere but we had plenty of original installments of The Voice, Revolution, How I Met Your Mother, Partners, 2 Broke Girls, Mike & Molly, Hawaii Five-0, Bones, The Mob Doctor, Dancing with the Stars, and Castle. The CW had a special called IHeartRadio Music Festival.

On NBC, it was another big night. The Voice won in both the 18-49 demographic and total viewership categories with a 4.5 rating and 12.32 million. It was up 2% over last week’s demo.

That was followed at 10pm with Revolution. The third episode registered a 3.2 rating with 8.40 million, down 6% from last week’s. This was the timeslot winner in the demo but was second in total viewers, behind Castle on ABC.

On CBS, all of the comedies were down when compared to last week but Hawaii Five-0 was up. How I Met Your Mother dropped 11% to a 3.2 rating with 8.15 million.

The second episode of Partners dropped 13% to a 2.1 demo rating and 5.71 million viewers. The show was in trouble last week and now it looks like it’s fate is sealed.

The night finished with Hawaii Five-0. Last week’s episode was a series low for the series and things got better this week — but just barely. The cop series attracted a 1.9 in the demo with 7.72 million viewers. It tied Castle in the demo and was in third place in viewership.

On FOX, there wasn’t any good news. Bones fell 9% when compared to last week’s demo, hitting a 2.1 in the demo and 6.90 million. That was followed by waiting-to-be-cancelled Mob Doctor at 9pm. The newbie series hit a 1.0 in the demo and 3.54 million, down by a whopping 24% week-to-week.

And finally, on The CW, we had the IHeartRadio Music Festival special. It drew a 0.7 demo rating with 1.72 million viewers and was in last place for both of the special’s two hours.

What do you think? Are you surprised by the lower ratings on CBS? Do you think the fates of Partners and Mob Doctor are sealed? What were you watching last night?

Revolution is GREAT. So is Hawai’i 5-0. They need to move it though. Monday is so stocked with good shows & Tuesday sucks.

I believe the cast and crew and creators have created something wonderful here that is truly funny if people would just give it a chance. The chemistry on the set with these talented actors is amazing.

I truly believe if they were to keep the older set of young boys to endear the audience to Joe and Lewis it would go a long way to getting more people interested in the show. Everyone loves kids.

REVOLUTION is awesome, if NBC cancels this after i’ve gotten this invested in a new series, i’m giving network tv

CBS needs to put Hawaii Five 0 on Tuesdays after NCIS LA. It’s really the third NCIS in a sense and the fans of NCIS are likely to also like Hawaii 5-0 as they are similar shows. Sticking it on Mondays has always seemed odd to me.

Hawaii Five-0 is nothing like ncis!! In my opinion anyway :\

LOL. Hawaii 50 is NOTHING like the amazing NCIS. Remember last year NCIS LA viewers didn’t even turn to watch Hawaii 50 when they did the cross over episode. They even tried to put NCIS LA and Hawaii 50 together in Australia to try to help Hawaii weak ratings and they had to move Hawaii fast from there because it was killing NCIS LA numbers. Both NCIS are great cop procedurals with strong casts, getting 20/15 million viewers each week, while Hawaii didn’t even got 8 million viewers last week. Nothing can help Hawaii 50 because the show is just… Read more »

HIMYM is showing its age, but it’s still the best thing in its time slot. I don’t care for “Partners,” although we enjoy the performance of the guy who was on “Ugly Betty.” I don’t know what’s missing on that show, but something certainly is.