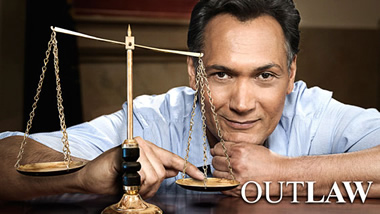 Many people first became aware of actor Jimmy Smits when he co-starred back on NBC’s LA Law in the 1990s. He’s worked on many TV shows since then — The West Wing, Cane, NYPD Blue — with varying levels of success. Now, he’s back in the courtroom again, playing a lawyer on NBC’s Outlaw. How will this new series work out for him? A big success or a quick cancellation?

Outlaw follows a Supreme Court Justice (Smits) who decides to step down and go back to being a lawyer to fight injustices. The NBC series also stars Carly Pope, David Ramsey, Jesse Bradford, and Ellen Woglom.

NBC gave Outlaw a special preview on Wednesday September 15th, in the plum spot of following the season finale of America’s Got Talent. The series premiere was reasonably sampled with a 2.3 rating in the 18-49 demographic and 10.68 million viewers. Those are okay numbers on their own but it’s not a good sign that Outlaw lost a significant amount of America’s Got Talent’s lead-in audience — 42% in the demo and 35% of total viewers.

A couple days later, in its regular Friday night timeslot on the 17th, NBC reran the pilot episode. Outlaw performed terribly but, after all, it was a repeat. The rerun attracted just a 0.9 in the demo and 3.93 million viewers. The NBC execs were surely hoping originals would perform better.

Not so much. This past Friday, episode two of Outlaw only mustered a 1.1 rating in the all-important demo ratings and 4.99 million viewers (per the overnights). It was in last place in both categories and lost a large percentage of its lead-in audience from Dateline. Last year, an episode of The Jay Leno Show even did better with a 1.6 and 5.79 million.

With ratings like these, it’s hard to imagine that NBC would bother ordering more episodes beyond the initial 13 installments. They may in fact decide to pull the show altogether and plug in repeats of another series. It looks like it’ll soon be back to the drawing board for Mr. Smits.

What do you think? Did you watch Outlaw? Do you like it? Is it worth saving or should it just be cancelled?

NBC needs to leave the show on the air, it was a great show and I look forward to watching more new episodes Jimmy smits was great and the rest of the cast complement him.

NBC is absolutly stupid. This is not the first show they have taken off the air that my husband & I absolutly lived. We liked everything about it. NBC did this with Chase also. I thought ladt fall started with great new showd i liked them all, my DVR was filled witj shows. NBC isnt letting these shows air long enough.

I think the show is a hit. They touched on real news Items. I would hate to see it canceled.

outlaw is original and jimmy smits is great as always. i hope it gets a real chance.

Miss the show, thought it wasa very thought provoking about how one person would give up so much to help the somewhat helpless. It was good to Jimmy back on t.v. Have missed him since N.Y.P.D. Blue & West Wing, not Cane so much

I loved this show. So sorry you didn’t try a different time slot. I like Jimmy Smits in most every show he does. If I wasn’t able to be home to watch the show I taped it

I just started watching in Australia. I am absolutely utterly devastated that they have decided to pull it from the show. The issues discussed are really important and relevant to today’s society, I love his character. I think Sonny is onto something

I think the show stepped on too many toes, political toes, that is, and I believe it was one of the best TV series ever aired on TV. I sure wish that the net work would reconsider. Why not, for once, have a TV show that addressed a few of the problems with big government? I think I know the answer, but I will leave it alone, for now, anyway.

Why do they always take off the decent shows. Keep it on Saturday if you need to as there isn’t any good to watch and this would be good

I think OUTLAW is an excellent show. Jimmy Smits does a fantastic job. He shows the righteous side of the law but with the imperfections of a human being in conflict. The drama is great and familiar to current issues happening in real life.

I think is work is one of the best he has done.

Give a chance, keep it, change the time.
eeded changed it to a different

I really loved this show. How could they(NBC) cancel the show without giving a real chance?Shame on you!