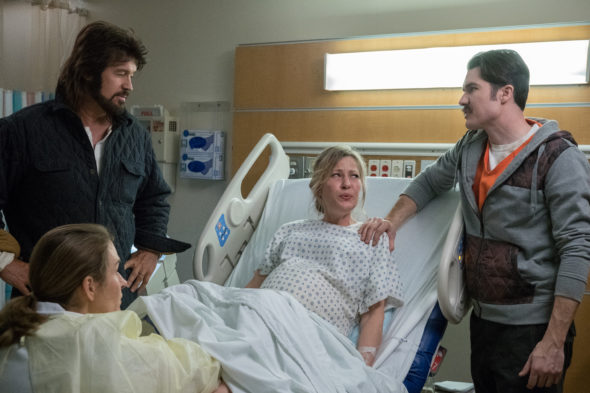 Elvis has left the building. CMT has cancelled its Still the King TV show after two seasons. The sitcom, starring Billy Ray Cyrus, first premiered on the country music cable network in June of 2016. Now, episode 2.13, “Who’s Your Daddy,” will serve as the Still the King TV series finale.

An original CMT comedy, Still the King centers on Cyrus as Vernon Brownmule. The cast also includes Joey Lauren Adams, Madison Iseman, Jon Sewell, Travis Nicholson, Leslie David Baker, Kevin Farley, and Justin Dray. Austin Swift, Arden Myrin, and Natalie Dreyfuss recur in the second and final season. It follows “Burnin’ Vernon” — a scandal-ridden, washed-up, one-hit-wonder who has been eking out a living as an Elvis Presley impersonator. Now out of jail, he wants to reclaim his music career, while still being a good dad to Charlotte (Iseman). Since he may also be the father of Debbie’s (Adams) unborn child, Vernon must learn to balance his quest for fame with family responsibilities.

Still the King: A Look at the Ratings

The second season of Still the King averaged a 0.03 rating in the 18-49 demographic and 96,000 viewers. Compared to season one, it was down by 72% and 76%, respectively. In its second season, Still the King was the lowest rated among original, scripted CMT TV shows, falling far below the first and only season of the cancelled Sun Records TV series.

After a couple of years of trying its hand at scripted originals, CMT will now concentrate on unscripted programming. Toward that end, the network has also announced that the upcoming installment of Nashville will be its sixth and final season. CMT originally got into the scripted game by picking up the country music drama, after ABC cancelled Nashville following its fourth season.

Under the new Viacom leadership, CMT, a reinforcing brand in the new structure, has shifted its programming strategy, focusing solely on original unscripted fare, which is significantly cheaper than scripted. In addition to canceling Still the King, the network also is bidding farewell to flagship drama Nashville, whose upcoming sixth season will be its last, to go all-unscripted. It previously aired drama series Million Dollar Quartet (sic) and still carries off-network scripted shows.

CMT gave the all-unscripted lineup a spin in the current quarter. Without any scripted series, CMT has the highest year-over-year gains of any Top 50 ad-supported cable channel in both adults 18-49 and women 18-49. Overall, with help from Nashville and Still the King, the network has garnered 49 consecutive weeks of year-over-year growth, the longest-running streak in ad-supported cable.

What do you think? Are you a fan of the Still the King TV series? Should CMT have cancelled or renewed it for season three? Sound off, in the comments.

Still The King was one of my favorite shows so I am sad that it was canceled. Wish we could have seen another final episode to know if Vernon was the father. I choose to believe he was. This was a fun show to watch.

I think that it had come to the point where it had nowhere to go.

It wasn’t bad but the second season just ran out of steam.

I really enjoyed the show. Sorry to see it go. Maybe another Network will pick it up.

I NEED TO KNOW WHO THE FATHER IS. this is like the worst cliffhanger ever and now I regret ever watching the show since there will be no resolve. I’m definitely now less of a CMT fan for this.