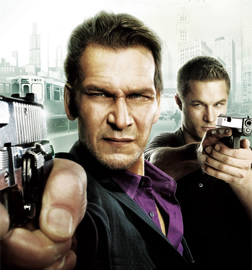 TV show description:
FBI veteran Charles Barker (Patrick Swayze) doesn’t always follow proper protocol, but he gets the job done. Barker is known as an undercover expert. He uses psychological means to gain the confidence of criminals and then sets them up to be arrested and sent to prison. He’s so good at his job that his bosses suspect that he’s been swayed to the dark side. Despite this, he gets a new partner — rookie Ellis Dove (Travis Fimmel). On his first day, Barker hazes him but then trains him in the same type of psychological undercover work that he’s so good at.

Ellis can never be too sure how serious Barker is, and doesn’t totally trust him — at least not enough to do everything as willfully as the veteran agent wants him to. He’s stressed, but not just because he’s partnered with Barker. He’s also been asked by Internal Affairs to spy on Barker so that they can find out once and for all if he’s gone bad or not.

One of the agents investigating Barker is Ray Beaumont (Larry Gilliard). Despite the fact that the information Ellis gives him doesn’t implicate Barker, Beaumont is sneaky enough to try and twist it that way. Harry Conrad (Kevin J O’Connor) is Barker’s boss and respects his work though he’s also supervising Ellis.

Rose Lawrence (Lindsay Pulsipher) is a law student and Ellis’ neighbor. Though she hasn’t noticed him, Rose agrees to go out with him anyway. She’s not sure why he’s so closed off, but the truth is he can’t tell her about his job.