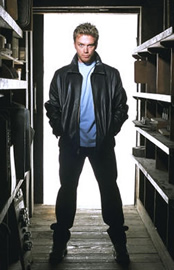 Real Shame. What’s the Real Reason why The Dead Zone’s been cancelled? I doubt it’s for the reason listed in this article. Oh well, your loss really. With more crap on TV less intelligent people will be watching and money spent won’t be on any products they don’t see advertised. It All for the MONEY.

Are you kidding me, I just bought the entire series of the dead zone just to find out there is no ending. I’m pissed. That’s such b.s. How can they not finish the series. They just leave you hanging. I loved this series. What a damm joke. Everybody that was involved with cancelling the series before it was finished should be ashamed of yourselves. I’m very very pissed and disappointed.

Sit right back and you’ll hear a tale, a tale of a fateful trip, that started from this tropic port, aboard this tiny ship, the mate was mighty sailing man, the skipper brave and sure, five passengers set sail that day, for a three hour tour, a three hour tour, the weather started getting rough… anyway, they spent three years on the air and then 15 years later they brought em back for a TV movie and got em off the island.

I never watched the series when it was on so many years ago but I have just seen all seasons over the last few months. I am honestly in withdrawal right now as I had immersed myself into the characters and now I have nothing. I don’t really understand how I can be somewhat depressed because a show ended, but it is true. There was just something about The Dead Zone that was different than any other show. It is interesting to see that others felt so strongly about the series, too. I have solace in seeing I’m not alone…..but… Read more »

I stopped watching it when it became swamped- in politics-with a story line that should have been shot down in ONE episode .THEN made the error of watching again on Amazon–Season ONE-is wonderful. THEN it all falls apart

I love the movie dead zone. I would gladly pay to watch the series.

You don’t have to pay to watch it! I just watched all 6 seasons for free on Tubi! I absolutely LOVED and enjoyed this show and am very disappointed to find out there is no season 7… no conclusion.. I have so many questions!! And OMG, JJ finally said what I wanted to hear him say since he found out that Johnny was his bio Dad….and then boom! Nothing after that.. grrrr I NEEEED MORE!

Your not alone, glad someone else feels the same. I hated to see Walt die.

I LITERALLY need detox or rehab for the final season………..PLEASE MAKE MORE…….There is no other show like it and the actors are AMAZING!