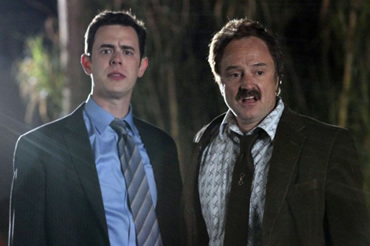 I love this show. Not much makes me really laugh, but this show does!!!!!!!

I love this show and can’t wait ti see it again.

This show is very unique. I really enjoy it and hope FOX doesn’t pull another Family Guy.
Canceling this show would be a mistake. Besides FOX has House and Glee, so they’re all set.

no offence but you Americans dont know a good show from a bad one you need to take an area in the uk before you call it a fail. the main reasons y is because this is a really good comedy and the usa dont understand sarcasm please dont axe this i have 1,000.000 people persecution not to axe this.

I love this show. I can’t believe it hasn’t taken off. It is by far the best cop show I’ve ever watched, and easily made it to the upper area of my list of favorite shows. I’d like to see it go for a good 8 solid seasons, even more if they keep coming out with good episodes. It would be very depressing to see it cancelled after one season.

We enjoy this show and will watch it as long as they continue to put it on the air.

As with several other commentors, it is one of the few shows that my husband and I enjoy together. I like it more than he does!! There are very few shows that make me laugh out loud – and leave me feeling happy at the end of every show. Don’t tweak it much if at all and keep it on the air!!!

What a fun show to watch! My husband and I can’t wait to see the next episode each week. We are really looking forward to Season Two! Why do all the good shows get canceled? This show makes you laugh and has a unique flashback presentation that keeps you on your toes.

This is my husband’s favorite show. Please do not cancel it! I love the quirky cops….why do we cancel these fun, light shows for stupid, heavy, serious, reality shows……….boring. We could watch the news for reality drama. The one liners delivered in this show become part of our conversations! A little outrageous is refreshing. I love how Bradley takes the part, and obviously has so much fun with it. What an absolute crack up!

I will be so disappointed if this show is canceled. Every time I watch it, I’m smiling and laughing the entire show and it makes my day. The combination of Bradley and Colin is really wonderful. They’ve really got great chemistry together. I particularly love Bradley’s character, but enjoy Colin’s too! I’m so sick of all these “reality” shows. They’re about as real as implants! Please don’t take this show off the air – we need more like it!!!

Just hilarious, I’m glad they made this 🙂

This show is absolutely great!!! They need not to cancel. Be patient. Good lord there is enough bad tv that we are forced to watch so let us PLEASE have something good for once. And move it to Mondays again! Friday is a death sentence!!!!

Decently written show, I look forward to seeing it in the fall.
Remember with internet, these shows can be seen after they air. So… Friday is still ok.
It was on Monday to cover the slot 24 left.

This is a awesome show. At first we were’nt sure, but as we continued to watch, it just kept getting funnier, and more clever. Very entertaining!

This show is awesome! It’s not like any other cop show out there, and kicks the crap out of them. FOX is setting it and Human Target to fail this Fall by sticking them on Friday nights. I will try my best to watch the when I am able to, but who is really home on Friday night aroud 8-10pm? Not saying everyone is out, but Fridays in the fall are busy for me with work and football games and etc.