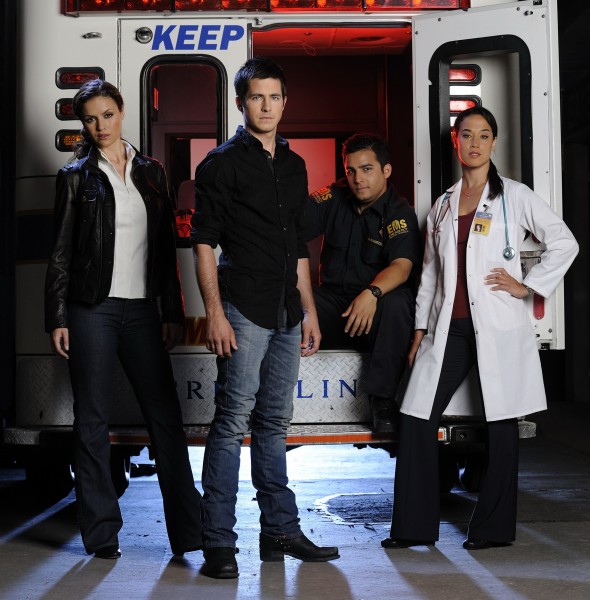 TV show description:
Toby Logan (Craig Olejnik) is a young paramedic who has a secret. He’s also a telepath who’s managed to keep his extraordinary ability hidden. He explores its possibilities only with his long-time mentor and confidant, Dr. Ray Mercer (Colm Feore).

Responding to calls with his paramedic partner, energetic Osman “Oz” Bey (Ennis Esmer), Toby uses his ability to help people in crisis. In the process, he also tries to unravel the truth about his own enigmatic past.

While his professional life is in check, Toby’s personal life could use some rescuing of its own. With the help of Detective Charlie Marks (Lisa Marcos) and his ex-girlfriend, E.R. doctor Olivia Fawcett (Mylène Dinh-Robic), Toby realizes his gift can help others in more ways than he imagined.

What do you think? Do you like The Listener TV show? Do you think it should have been cancelled or renewed for a sixth season?

It seems past Canadian shows are better than our rerun cable shows in the US. Perhaps we should air more of those shows

This is addressed to the script writers of today. Please note the comments below on the 4th block. All are of the same opinion as I. What does it take to understand a large majority of people enjoy these types of shows? Two of my favorites Father Dowling, Early Edition, Ma and PA Kettle old show, The Beverly Hillbillies, etc. can’t Hollywood understand this? Thanks

I wish they had AWESOME shows like this w/o ANY SEX!!! WHY DOES EVERYTHING ON TV HAVE 2 HAVE SEX!?! I would love 2 watch that program. I only saw a few shows b4 they started in w/ the sex. Then ” I QUIT WATCHING”. I try 2 use the love word sparingly. Everyone says “I love that food”. I love that shirt”. I love those earrings”. I try not 2 say that. The word is used wrong. I do the same thing 2 much. I catch myself all the ×. But I can’t help it this × “I LOVE… Read more »

I Really Wish that the show “The Listener” was renewed back when it was cancelled. But since it wasn’t, I Hope it will be Brought Back As Soon As Possible. I have seen the reruns So Many times, as that is all that I have for now. Or even make “A Listener” movie on DVD for a money-making venture. I would Welcome Anything with New Listener shows, maybe with the characters taking the “next steps”. Michelle getting promoted to head of the unit and issues that she and the others have with her as the big boss; Becker could get… Read more »

I viewed the Listener for the first time tonight and would like to see more episodes of it. Is there a way I could watch past episodes and have it started again? If so please let me know what station it will be on.

Great show. A good idea for a series. I hope they will bring it back.

Please bring back “THE LISTENER” TV Series. I LOVE THIS SHOW & I REALLY HOPE YOU GUYS WILL BRING ALOT MORE SEASON’S. There are ALOT of people upset that this series is not on anymore. That we have to watch the reruns over & over again cause we like it so much. Doesn’t that tell u guy’s something? So PLEASE bring “The Listener” Back VERY SOOOOOOON!!!! Please & Thank U VERY MUCH. Have a wonderful day. Bye for now. P.S. I REALLY Miss the people that passed on the show but I also REALLY like the actor’s & actresses on… Read more »

I love the show and hope they bring it back .I watched when it was on . And was sad when it was not on anymore.