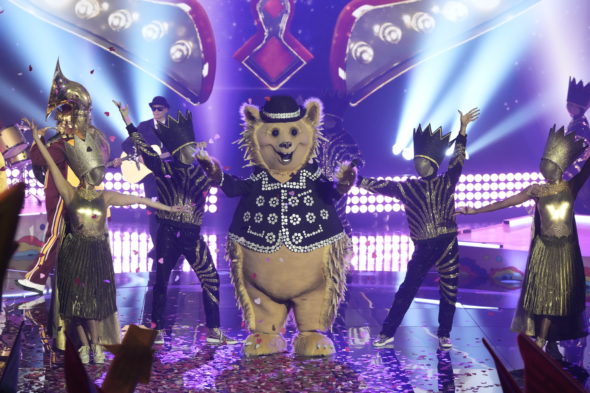 The crazy characters are coming back this spring. FOX has quietly renewed The Masked Singer for a ninth season.

A mystery singing competition series, The Masked Singer TV show is hosted by Nick Cannon with Jenny McCarthy, Nicole Scherzinger, Ken Jeong, and Robin Thicke sitting on the judges’ panel. The show features singing celebrities facing off against one another with one major twist — each contestant is covered from head to toe in an elaborate costume, complete with a full face mask to conceal his or her identity. With each performance, the host, panelists, audience, viewers — and even the other contestants — are left guessing who is singing behind the mask. In season eight, the unmasked participants have included George Clinton,  George Foreman, Le’Veon Bell, Joey Lawrence, Kat Graham, Jerry Springer, Gloria Gaynor, Mario Cantone, Daymond John, Mike Lookinland, Barry Williams, Christopher Knight, Montell Jordan, Jeff Dunham, Chris Kirkpatrick, Eric Idle, and William Shatner.

Airing on Wednesday nights, the eighth season of The Masked Singer averages a 0.58 rating in the 18-49 demographic and 3.48 million viewers. Compared to season six (which aired in Fall 2021), that’s down by 38% in the demo and down by 22% in viewership in the live+same day ratings (which includes DVR playback through 3:00 AM). Episodes pick up 30-40% more viewers in the live+7 day ratings which include delayed viewing.

FOX confirmed the renewal when the network announced its plans for midseason. A premiere date for season nine of Masked Singer will be announced in the future. For what it’s worth, the most recent spring seasons, seasons five and seven, launched in March.

What do you think? Have you liked the recent changes to The Masked Singer on FOX? Are you glad that the series has been renewed for a ninth season?

Best show ever. Love all the seasons hope it never cancels.

The biggest thing I like about the Masked Singer is that it doesn’t require your undivided attention. A family can sit and run their mouth about who the singer is and not miss a thing in the show. Great family fun because you don’t have to be glued to the screen.