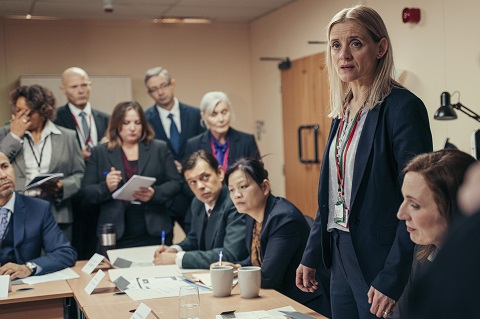 “AMC today released the official trailer for The Salisbury Poisonings, premiering in full on Thursday, October 1, 2020 on AMC+, and on AMC linear early next year. The four-part drama hailing the heroic efforts of the people of Salisbury stars Anne-Marie Duff, (Shameless, His Dark Materials), Rafe Spall (The War Of The Worlds, Denmark), MyAnna Buring (The Witcher, Ripper Street), Annabel Scholey (The Split, Britannia) and Johnny Harris (This is England ’86, Jawbone).

The Salisbury Poisonings tells the remarkable story of how ordinary people and public services reacted to a crisis on their doorstep, displaying extraordinary heroism as their city became the focus of an unprecedented national emergency. In March 2018, the eyes of the world turned to the British city of Salisbury when it became the epicenter of what has been described as one of the biggest political events of the 21st century – but until now, the heroic acts behind the headlines have not been told. Within three days of the assassination attempt on double agent and spy Sergei Skripal and his daughter Yulia, key agencies discovered that a lethal nerve agent called Novichok was used, just half a teaspoon of which could kill 20,000 people. Within four days, hundreds of traces were found across the city, and, just when things were finally thought to be under control, a perfume bottle containing the nerve agent was discovered, throwing the investigation into renewed chaos.”

Check out the trailer for The Salisbury Poisonings below.

What do you think? Will you check out this new limited drama on AMC+ in October or on AMC in 2021?

Just finished watching this and even as a UK resident I was surprised at some of the things that were revealed.