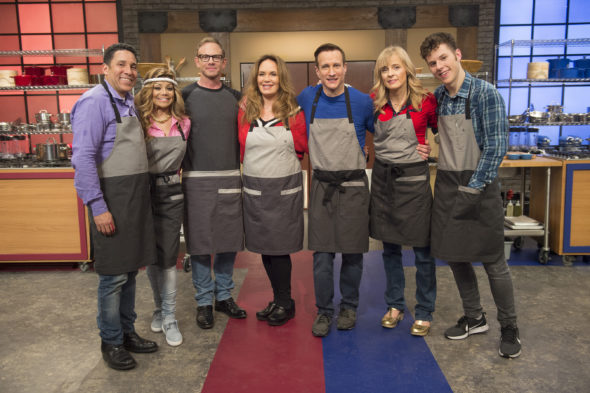 Preheat your ovens and change the batteries in your smoke detectors. Food Network has announced the return of its Worst Cooks in America TV show. The six-episode season is another installment of Worst Cooks in America: Celebrity Edition, which premieres Sunday, April 15, 2018 at 9:00pm ET/PT.

Anne Burrell and Tyler Florence are returning to lead their star recruits in the new cycle of Worst Cooks in America: Celebrity Edition. The contestants, who are playing for the glory of being the most improved cook and $25,000 for their chosen charity, are: Catherine Bach, Maria Bamford, Nolan Gould, La Toya Jackson, Oscar Nunez, Bronson Pinchot, and Ian Ziering. Guest judges this time out, include: Rocco DiSpirito, Cady Huffman, and Aarthi Sampath.

NEW YORK – March 14, 2018 – Worst Cooks in America: Celebrity Edition is back on Sunday, April 15th at 9pm (all times ET/PT) with a new star-studded cast of cooking disasters who are determined to improve their kitchen game. In the six-episode season, food masters Anne Burrell and Tyler Florence each lead a team of recruits through an intense culinary boot camp where only the most improved cook is left standing and wins $25,000 for the charity of their choice and bragging rights for their team leader. This season’s celebrity recruits are: Catherine Bach, Maria Bamford, Nolan Gould, La Toya Jackson, Oscar Nunez, Bronson Pinchot and Ian Ziering.

“With Anne and Tyler as team leaders, these celebrity Worst Cooks are in for a wild culinary ride,” said Courtney White, Senior Vice President, Programming, Food Network, Travel Channel and Cooking Channel. “The cast enters boot camp as comical kitchen disasters, and their transformation to skilled cooks is entertaining and inspiring.”

In the first episode, Anne and Tyler immediately throw the celebrity recruits into their first challenge after they arrive. They must cook their signature dishes so the chefs can assess their skills, or lack thereof, in the kitchen. Then the chefs teach the celebrities how to make a Hollywood-worthy breakfast dish, which proves to be disastrous for these clueless cooks. After Anne and Tyler choose their teams, the celebrities are anxious to officially start their culinary training. Upcoming episodes feature a fish and chips challenge, pizza-from-scratch battle, guest appearance from last season’s runner-up Melissa Peterman and an “Aluminum Foil Chef” competition. In the finale on Sunday, May 20th at 9pm, the two most improved recruits must cook a restaurant quality meal for guest judges Rocco DiSpirito, Cady Huffman and Aarthi Sampath, who will decide which one takes home $25,000 for the charity of their choice and bragging rights for their team leader.

Viewers can learn more about the famous faces competing for kitchen glory at FoodNetwork.com/Worst Cooks and watch video highlights, see photos from the challenges and take quizzes to improve their cooking. Tell us who your favorite celeb is on social media using #WorstCooks.