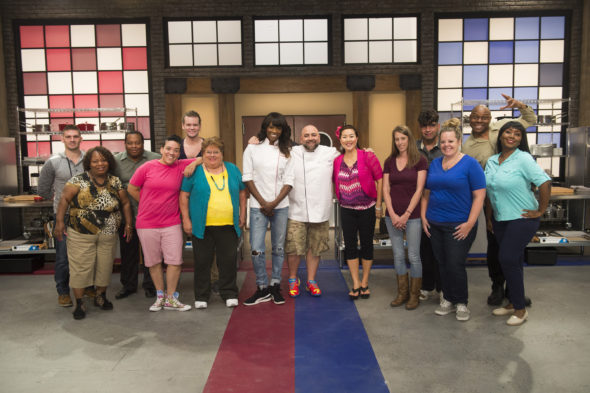 Do you have what it takes to bake? Food Network just announced season two of Worst Bakers in America will premiere in July.

Hosted by Lorraine Pascale and Jason Smith, the culinary competition series pits eight bad bakers against each other in a series of fast-paced challenges.

NEW YORK – June 13, 2019 – Lorraine Pascale and Jason Smith have their work cut out for them on the new season of Worst Bakers in America, as they try to transform eight kitchen disasters into baking masters. The intense five-week baking bootcamp begins on Monday, July 22nd at 10pm ET/PT, as Jason and Lorraine attempt to mold these masters of cake-wrecks and colossal cookie-fails into one vastly-improved pastry expert. Based on the recruits’ performance and progress in a series of fast-paced baking challenges, they will be narrowed down each week until only two are left standing to face off in an intense battle. Only one will be the most improved and will rise to the top and earn the $25,000 grand prize.

“The baking blunders and mishaps of the recruits add dramatic comedy to the competition as they struggle to become better bakers on the new season of Worst Bakers in America,” said Courtney White, President, Food Network. “It’s no cakewalk for Lorraine Pascale and Jason Smith, but they are determined to whip the recruits into baking masters, teaching them the skills and techniques required to succeed in each of the difficult challenges.”

On the premiere, Jason and Lorraine task the recruits to recreate their dream dessert to help determine who they want to mentor on their team. Each week, the recruits will first be tested in skill drills and games from guessing surprise baking ingredients based on touch, tasting wild confections in blind taste tests, and decorating cakes against the clock in a speed relay race. The one that rises to the top will earn special advantages in the next round of challenges. Over the five weeks the competitors will be challenged to create multi-colored mirror glazed cakes, whip up p�te � choux pastries, and design 3-D animal cakes. The worst baker from each team that crumbles under the pressure will be eliminated.

The season culminates on Monday, August 19th at 10pm ET/PT when the two remaining recruits must put their new baking skills to use as they create a three-course dessert menu to impress special guests Dan Langan, Thiago Silva, and Melba Wilson. The one that has transformed the most will go home with the $25,000 grand prize and will make their leader proud!

Fans can meet the contestants and learn more about Jason and Lorraine at FoodNetwork.com/WorstBakers. Plus, follow #WorstBakers for the best show moments and memes, and watch the judges compete in fun challenges, taste tests and more.”

What do you think? Have you seen Worst Bakers in America? Will you watch season two?

Worst Bakers in America season 2 is the worst show on TV. I love to watch cooking shows on Food Network but this season of WBA is so hard to watch! If there is a season 3, could you please give the hosts/mentors real people to work with. I don’t expect good bakers but at least people who want to be better and not slapstick entertainers. This is not entertaining. I’m sure this is the reason for the poor ratings. You have too many people in season 2 who just seem to be bouncing off the wall.