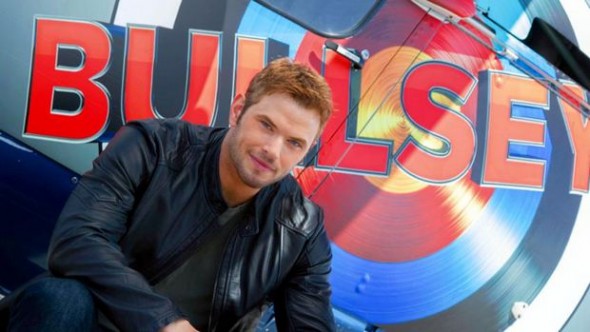 TV show description:
Hosted by Kellan Lutz and co-hosted by Godfrey, this reality competition series lets four men and four women test their bodies and brains in three ultimate challenges that ask nothing more than for them to hit the bulls-eye.

The fierce “weekend warriors” participate in three levels of extraordinary challenges, all of which involve using their bodies like human darts to hit targets — on land, sea, and air. As the rounds advance, only those with the sharpest aim move forward.

The first challenge finds the eight competitors vying to hit the center of a stationary target while leaping from a moving 18-wheeler, being pulled by a helicopter, or acting as a human slingshot being projected hundreds of feet through the air.

In round two, the remaining four competitors — two men and two women — race to hit as many targets as possible. These competitors may be aiming for targets while descending down a building or jumping between two racing speedboats.

In the third and final challenge, the remaining three competitors race against the clock to conquer the ultimate test and hit the final bulls-eye. The competitors’ ability to defy gravity and the laws of physics, while maintaining their focus, can mean the difference between going home empty-handed or with a $50,000 prize.

What do you think? Do you like the Bullseye TV show? Do you think it should be cancelled or renewed for another season?

I liked the show and It hasn’t air in 2 years.
I believe the show is cancelled.

are u going to air bullseye anymore?we love this show.can u plz let me know any air dates.

I love this show; always very exciting. Renew for 5 years. Kellan Lutz and Godfrey are fantastic.

Yes please keep it. It is a great show to watch as a family.

It was really Crazy-fun being the oldest Contestant ever-on show at 70-still young-go’in against 20yr olds! I made it into Semi-Finals-& only a few feet away from go’in into finals! They were just lucky I wasn’t in my 20’s-hav’in been Former-USA-NCAA-Gymnastic Champion! I was the Oldest ever to also compete in “Wipeut” at 64 & almost won it-took-3rd out of 24! I’m going for “America Ninja Warrior”- next Season at 71-still young & hopefully U-will see me again on “BULLSEYE”-Live Your Life Passion-Bullseye!!

Mr. Williams, I watched you on the show. You are insane, and i want to grow up to be just like you! I’m only 57 now, but I know that one day, if I work real hard to ignore all the people who try to make me act like an adult, I may meet your level of lunacy. Man, you are truly – in the original sense of the word – Awesome!

Renew forever. I think it is an awesome show

Bullseye is refreshing, original. Hope it is coming back on soon

Yes!!!! I loved watching real people competing in these awesome challenges!!! Bring it back!!!! PLEASE!!!! TV shows just aren’t what they were 30 yrs ago! This one was worth tuning into!!!!

I love this show! Please renew it for another season. It’s a fun show to watch with kids.