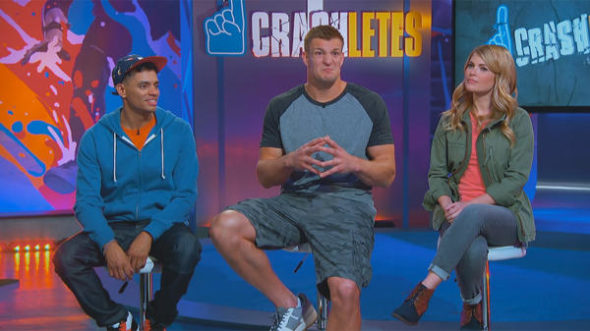 Crashletes is back! Recently, Nickelodeon announced the TV show will return for a third season in February.

Season three of Crashletes premieres on Nickelodeon on February 11th at 10 a.m. ET/PT.

NEW YORK-Jan. 16, 2018- Nickelodeon’s viral sports clip series Crashletes returns for its third season with the most outrageous sports moments and a superstar lineup of guest commentators, on Sunday, Feb. 11, at 10 a.m. (ET/PT) in the NickSports programming block, which will begin airing on TeenNick that day. Crashletes co-hosts Brandon Broady and Stevie Nelson will be joined by a guest athlete in each episode who will help provide in-depth analysis of viral sports bloopers, blunders and absurdities. Created by Rob Dyrdek and Shane Nickerson of Superjacket Productions (Fantasy Factory, Ridiculousness), Crashletes will premiere with back-to-back premieres on Sunday, Feb. 11 and air regularly on Sundays at 10 a.m. (ET/PT) in TeenNick’s NickSports block.

The third season of Crashletes, shot in an all-new, 360-degree set with a live studio audience of kids, will feature brand-new viral clip categories such as “Ball of the Wild,” when animals take athleticism to new heights, and “High-Priced Crashletes,” a tribute to those who crash into very expensive items. Fan-favorite categories returning this season include: “Synchronized Stinking,” a celebration of our favorite pairs of Crashletes who fail together; “Friday Night Cat Fights,” when cats show off their fighting skills; and more.

Superjacket Productions is an all-media production company formed by Rob Dyrdek and Shane Nickerson in 2013. Building upon the success of shows like Ridiculousness, The Dude Perfect Show, Fantasy Factory, and Rob & Big, Superjacket apply their comedic sensibility to highly repeatable formats, and strive to create uniquely entertaining content featuring the world’s most magnetic personalities.”

What do you think? Have you seen Crashletes? Will you watch the new season?