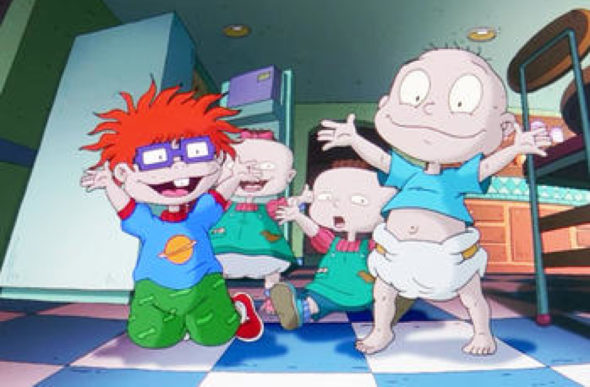 The babies are back! Today, Nickelodeon announced they are reviving the classic TV show Rugrats for a new season and movie.

The original cartoon followed the adventures of Tommy, Chuckie, Phil, Lil, Angelica, and Susie, a group of toddlers with active imaginations. The ’90s series ran for nine seasons before ending in 2004. Three movies and a spin-off series, All Grown Up!, were also produced.

Nickelodeon has ordered 26 new episodes of Rugrats and a live-action film. You can read more info about the revival below:

NEW YORK, BURBANK AND HOLLYWOOD Calif.,–July 17, 2018 – Viacom (NASDAQ: VIAB, VIA) flagship properties Nickelodeon and Paramount Pictures announced today a relaunch of the iconic kids’ TV series Rugrats, with a 26-episode greenlight from Nickelodeon, and a live-action film featuring CGI characters from Paramount Players. Both the TV series and the movie will include new adventures with beloved characters Tommy, Chuckie, Phil, Lil, Susie and Angelica, and will also introduce a new world of characters. Original creators Arlene Klasky, Gábor Csupó and Paul Germain will return to the TV series as executive producers. Nickelodeon’s Rugrats will be produced in Burbank, Calif., with production already underway. Additional news of the TV series, airdate and casting–and Reptar sightings–will be announced in the coming months.

The Rugrats movie will be written by David Goodman and is set to be released on November 13th, 2020 by Paramount Players, the division of Paramount Pictures that develops and produces co-branded feature films with Viacom’s leading media networks. Rugrats is the seventh film title announced in connection with this cross-company initiative.

“Rugrats is hands-down one of the most celebrated cartoons in TV history, and we are thrilled for a whole new audience to meet these iconic characters in brand-new adventures,” said Sarah Levy, COO, Viacom Media Networks; and Interim President, Nickelodeon. “What was true in 1991 when the original show premiered is still true today: kids are fascinated with the world of babies. We can’t wait for today’s kids to meet Tommy, Chuckie and pals.”

Rugrats joins the recently announced return of Blue’s Clues as the latest classic original series Nickelodeon is bringing back for today’s generation of kids and families. Nickelodeon produced and aired an all-new Hey Arnold! special in 2017, and has announced the return of two more beloved titles as forthcoming specials: Rocko’s Modern Life and Invader Zim.

“Now feels like the ideal time to reintroduce this iconic cast of characters to a whole new generation of young fans,” said Brian Robbins, President of Paramount Players. “Kids who grew up with Tommy Pickles and the Rugrats crew will now be able to share that experience with their own children.”

Rugrats focuses on a group of toddlers, Tommy Pickles, Chuckie Finster, twins Phil and Lil DeVille, and Angelica Pickles, and their day-to-day lives that became adventures in their imaginations. The original Rugrats series launched in August of 1991 and instantly became a groundbreaking phenomenon, spawning consumer products, three hit theatrical releases and cementing its place in pop culture history through its iconic characters, storytelling and unique visual style. Rugrats was in production for nine seasons over the course of 13 years. The series earned four Daytime Emmy Awards, six Kids’ Choice Awards and its own star on the Hollywood Walk of Fame.”

What do you think? Did you watch Rugrats as a kid? Will you watch the reboot?

My mom tv show is back